During our own revolution, we persuaded the French to support our efforts. They agreed, not from a love of democracy but from a love of themselves: they were well aware that backing us would weaken their major rival, the British. Now that we are a super power, we take a similar sort of approach: we back those who we think will support what we perceive as our interests (or at least the interests of those who hold wealth and power). Matters of principle are brought up against our enemies as rhetoric, but generally seem to fail to move us.

This “pragmatic” approach has led us to back rather repressive autocratic rulers. During the Cold War we would support almost anyone who would oppose the Soviets and we were tolerate of truly horrible violations of human rights and what we regard as our core political values. However, we often seemed to be woefully ignorant of what our approach would spawn. The most notable example is, of course, the fall of our ally the Shah and the creation of one of our most devoted foes. Our actions also served to create considerable anti-American sentiment in the world and helped to forge many of the problems that we now face. But at least we beat the Communists. Well, not China or Cuba. But at least the Soviets.

In the case of Egypt we pursued the classic approach: backing an autocratic ruler who was willing to play ball with us while being willfully ignorant of what was really going on within the country. As such, we were apparently surprised at what happened in Egypt (though it will, as always, seem obvious in hindsight).

With memories of Iran dancing in our heads, we are not entirely sure what to do. Will we lose yet another autocrat to a revolution of their own people and face another Iran? Will democracy triumph? Will chaos rule the land? Time, as always, will tell.

I would like to say that we have learned valuable lessons about backing autocrats against their own people, but that is obviously not the case. 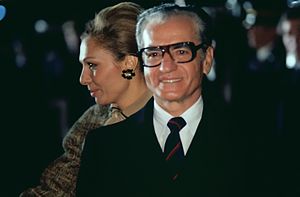 Turmoil is nothing new to Iran and the latest protests are waves created by the upheavals of the past. While Iran (once Persia) has a long history of unfortunate dealings with other countries, the country that most concerns Americans is, of course, America.

While an examination of the history shared between the United States and Iran could (and does) fill numerous books, the basic details can be quickly presented.

In 1951 the Iranian people elected Mohammed Mossadegh to the post of Prime Minister. Mohammed Mossadegh, backed by an ever growing nationalistic sentiment in Iran, decided to nationalize the oil industry. In response, the British attempted to launch a coup against him. When this failed, Churchill tried to persuade Truman to get the CIA to stage a coup of their own. Truman refused to do this.

Unfortunately for Iran, Eisenhower (perhaps worried that nationalization would lead to socialism) had no qualms about getting the United States involved in toppling a foreign ruler. In 1953 the government was overthrown and Mohammad Reza Shah was installed by the United States as ruler of the country. During the Cold War America was often quite willing to betray its ideals by supporting repressive dictatorships-as long as those dictatorships claimed to be on our side. The Soviets were equally happy to back dictatorships as well. Of course, we professed democratic ideals, so our support of such brutally undemocratic rulers was rather ironic.

The Shah proved to be a staunch American ally and also a dictator. Not surprisingly, his oppressive ways did not endear him to the people of Iran and he was famously overthrown in 1979.  While there were some moderates in Iran at this time, the revolution was quickly taken over by the Fundamentalist Shiite clerics and Iran was transformed from a dictatorship propped up by America to a theocracy that professed to want death for America.

Having lost Iran as an ally, the United States was happy to help Iraq’s Saddam Hussein. During the long Iran-Iraq war, the United States aided Iraq. Ironically, America latter fought two wars with Iraq and we now occupy that country.

Given this history, it is hardly surprising that the current rulers of Iran are able to use the United States as an effective political tool.  We provided them with a rather convenient Satan to use in various ways. They might have learned some of this lesson from us. After all, we used the specter of Communism as our Satan. Our current devil is, of course, terrorism.

This now leads us to the current situation. As in 1951 and 1979, a large number of Iranians are not happy with the government. The people are in the streets for protests and some people are being killed. The current rulers of Iran are obviously familiar with history, so they are no doubt concerned that they might find themselves on the other end of a revolution. Of course, the situation is currently not a revolution…but that is no doubt what the Shah thought back in 1979.

Back in 1953 we dealt with Iran by overthrowing a democratically elected leader who was standing up to Britain. This was, of course, amazingly ironic. In 1979 our puppet government was overthrown. Now in 2009 we are watching the situation in Iran, wondering what to do.

In regards to a coup, that seems to be incredibly unlikely. Even if we had a chance of pulling it off, it would be yet another betrayal of our principles and would be a disaster for US diplomacy. Fortunately, I doubt the Obama administration is even daydreaming about such an action.

In terms of taking a more active role in the situation, my view is that we are in a dilemma. On one hand, if we say nothing and do nothing, then we would seem to be betraying our ideals and leaving the protestors on their own. We would also, it might be argued, seem weak and timid to the world.

On the other hand, if we try to get involved with the protests, then we run the risk of aiding the government. After all, we are their Great Satan. They could point to US involvement as an attempt on our part to interfere with their country and use this to justify (or rationalize) cracking down on their people. They could also use this to discredit the reform movement by claiming that it is being controlled by the United States. They do, of course, have quite a history to draw upon.

The challenge is, of course, to make it through the two horns of the dilemma. Doing and saying nothing is morally unacceptable and would also waste an opportunity. From a purely pragmatic standpoint, weakening or distracting the current government of Iran is advantageous to the United States. After all, while they are dealing with their own citizens, they have less resources to use against the United States. So, we have to find a way to do something without being (or appearing to be) meddling imperialists.

Doing some of it is easy. We can do what we are doing now, namely getting information about what is happening in Iran out to the rest of the world via our media. We can also present our criticism in a way that makes it clear that our concerns are for peace, democracy, and fair elections. Working with the world community is also an excellent approach.

Of course, Obama’s approach does have its risk. If, as his critics allege, we are being too timid and weak, then the Supreme Leader might feel free to do whatever he wishes. After all, if he believes that the United States and the rest of the world will simply stick with vague criticisms, then he would have no fear of meaningful responses to a harsh crackdown. That, then, is the challenge America faces: how do we help out the reformists while avoiding the appearance (and reality) of imperialism?