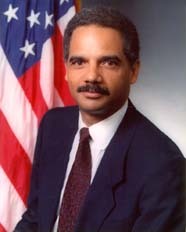 Back during the bailout, the phrase “too big to fail” was used to refer to corporations that were regarded as too important to the economy to allow them to fail. To prevent these failures (or so it was claimed) public funds were deployed. While it seems blindingly obvious that a multitude of misdeeds lay behind the meltdown, the federal government has not engaged in a single prosecution. More recently, Holder’s Department of Justice decided not to prosecute HSBC despite the fact that they had apparently been engaged in rather serious money laundering. This created a new phrase, “too big to jail.”

Interestingly, the legal trail of “too big to jail” can be traced back to a 1999 memo by Eric Holder entitled “Bringing Criminal Charges Against Corporations.” While the memo does not assert that executives cannot be prosecuted, it does provide an excellent escape hatch for big corporations. To be specific, Holder contends that the state should consider “collateral consequences” when making decisions about prosecuting corporate crimes.  Holder seems to still hold to the principles of the memo and while Obama has been attacked as being an anti-business socialist, the Department of Justice has been extremely gentle in its response to white collar crimes committed by the top folks in big corporations.

On the one hand, the idea of considering consequences does make sense from a utilitarian standpoint. If, for example, prosecution would create more harm than good, then it could make excellent moral sense not to prosecute. However, there is is the utilitarian concern that the practice of  allowing corporate criminals to avoid prosecution on this principle would do harm to the legal system as a whole by undermining public faith in its justice. On the other hand, the idea that people (and corporations are legal people) can avoid prosecution because applying the law to them would result in collateral consequences seems rather contrary to the idea that no one is above the law. While I do believe that justice can involve considering the consequences, justice also seems to require consistency in the law-and allowing corporate criminals a special out seems to be unfair and inconsistent.

In 1999 Holder also advanced the notion of deferred prosecution for corporations. Under this principle, corporate defendants can be given what amounts to amnesty in return for a fine (usually small relative to corporate earnings), reforms and cooperation. This principle is connected to the principle about consequences in that a plausible reason for allowing this deferred prosecution is to keep a corporation going-and thus keep people employed. During the Arthur Anderson incident, the state brought criminal charges against the company and this resulted in the loss of about 28,000 jobs when the company failed.

On the one hand, this principle does have appeal. After all, prosecution could result in the destruction of a corporation and this could harm people who are actually innocent of wrongdoing. Deferred prosecution would, in theory, allow the problems to be addressed while avoiding the destruction of the corporation. On the other hand, there is the obvious concern that prosecution might be “deferred” forever. Even if the deferment is not eternal, there is the concern that the punishment will not be serious enough to deter future behavior.  So far, the fines that have been paid by corporations tend to be small relative to their yearly profits and it seems unlikely that such punishments will have a significant deterrence value. After all, if a corporation can make massive profits doing illegal things like money laundering and then  pay what is, to them, a moderate fine, then there is little incentive to avoid such illegal activities. To use an analogy, if I took up robbing banks and my punishment was that I had to pay a fine equal to a modest percentage of my stolen money, then I would have little incentive to stop robbing banks. As might be guessed, this is a problem.

Overall, the principles of considering collateral consequences and allowing deferred prosecution are not without merit, at least on the surface. However, while the application of these principles might result in short term goods (like preserving corporate jobs), they seem likely to create long term evils-namely a situation in which corporations are ever more likely to engage in misdeeds because they know that the punishments will be fairly minimal. However, the overall consequences of this will be rather bad, such as companies destroying themselves and the economy. Too big to fail and too big to jail are bad ideas and it is far past the time that the approach to corporations be changed.