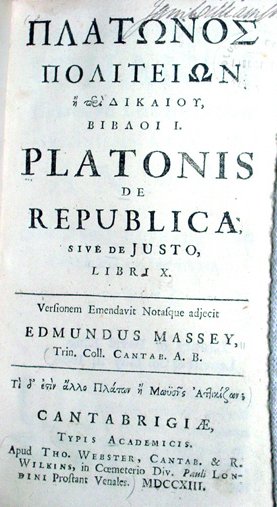 As a professor (and even worse, a philosophy professor) I have become accustomed to people talking about the real world as a land far from the ivory tower in which I am supposed to dwell. Naturally I, and folks who are supposed to be like me, are not supposed “to get” how the real world works. Thanks to Sarah Palin and others, I have also grown familiar with the idea of a Real America, which is also presumably a place where I do not live. Not surprisingly, all this talk of the real got me thinking.

When folks accuse me, as a professor, of not being in the real world I tend to smile a bit. After all, there is a certain irony in accusing a philosophy professor of being far from the real world or not “getting” the way the real world works. This is because, obviously enough, of Plato’s famous discussion of the distinction between the lovers of wisdom (philosophers) and the lovers of sights and sounds. For Plato, the true philosophers were the ones who deal with the real.  The real for Plato is, of course, those mysterious forms. The other folks, those who seem to now claim to be the kings of the real, were characterized as merely playing with images and opinions.

Naturally, talking about Platonic forms and other philosophical stuff does little to convince folks that I  do not live many zip codes removed from the real world. As such, it seems like a reasonable approach to set aside talk about unseen realities and take a somewhat different approach.

One reasonable approach involves considering what is supposed to distinguish the real world from the sort of world that I and other philosopher types are supposed to reside.

On the face of it, my “world” seems to be just as real as the “world” of the folks who accuse me of keeping it unreal. After all, the buildings seem solid enough as do the people around me. I do work, I get paid, I interact with people, and do the things that other folks do. As such, my “world” just seems to be part of the world, rather than an unreal realm distinct from the allegedly real world.

But, someone might say, you philosopher types deal with things that are not real. You live in books, talk about made up ideas and so on. In the real world we deal with real things.

One obvious reply is that the “real” world contains an abundance of made up ideas and other such things that are supposed to be part of the unreal world. To use an obvious example, consider politics. As another obvious example, consider the financial system. The so-called real world seems no more (or no less) real than the world of philosophers and other academic folk.

But, suppose that I am willing to accept that the “world” I occupy is not the same as the “real” world. That is, that there are differences between what I do in my professional life and what, for example, people who are bankers, construction workers, engineers, financial planners, bureaucrats, priests, and so on do. There is still the obvious question as to why their “way of life” should be considered real and mine should be considered unreal.

This would seem to take us to the old saw that philosophy in particular and intellectual endeavors in general are useless. The real world is the world in which people bake, build and kill rather than think, talk and write. However, this seems to be a mere prejudice on par with intellectuals looking down on those who bake and build for not discussing Proust over lattes in the cafe. These “worlds” seem to all be quite real. I see the value in being able to repair a two stroke engine (having done it myself), cook a fine steak (or tofu) or put a round through a person’s head at 800 meters (haven’t done that, but could). I can also see the value in being able to consider various moral views, speculate on the nature of the universe or do mathematical proofs.

This is not to say that different professions are not different and that some professions (or specific people) might be less than useful. However, the blanket dismissal via the use of “the real world” seems to have no real substance.

As far as “getting it” or being part of the Real America (or Real Britain or whatever), this seems to be primarily a rhetorical device. Merely saying that someone does not get it or accusing them of not being Real Xs does not prove that they are in error or morally wrong. For example, someone might tell me that I “just don’t get it” when it comes to taxes and government spending because I argue that cutting the deficit requires increasing some taxes and reducing major expenditures, such as defense spending. Obviously enough, no matter how many times someone says that I do not “get how the real world works” or that I am not part of the Real America, he does not show that my view is in error.  What is wanting is, of course, an argument that shows that I am, in fact, in error.

In many cases it seems that accusing someone of “not getting it” or “not understanding the real world” or of not being “real whatever” is merely another way of saying “they don’t believe what I believe” or “they don’t see the world as I see it” or “they do not have the same values as me.” Obviously enough, the mere fact that someone has different beliefs, views or values does not prove that these beliefs, views or values are inferior or mistaken. Of course, the use of such rhetorical devices can be rather effective. After all, the real people want to get it.