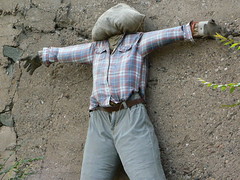 Straw man is a rather commonly committed fallacy. Interestingly, it is almost as common for people to accuse others of making straw men as it is for people to actually commit said fallacy. Since I am in a phase of holiday laziness, I decided to write a bit about straw men, lies and errors rather than take on a major topic.

The straw man fallacy is committed when a person simply ignores a person’s actual position (argument, theory, etc.) and substitutes a distorted, exaggerated or misrepresented version of that position. This sort of “reasoning” has the following pattern:

1. Person A has position X.
2. Person B presents position Y (which is a distorted version of X).
3. Person B attacks position Y.
4. Therefore X is false/incorrect/flawed.

This sort of “reasoning” is fallacious because attacking a distorted version of a position simply does not constitute an attack on the position itself. One might as well expect an attack on a poor drawing of a person to hurt the person.

Obviously enough, it is reasonable to point out when someone is making a straw man and to note that any attack on the straw man will fail to do any damage to the original version. Of course, it is important to be sure that such an accusation actually fits.

Whether a characterization is a straw man or not depends, obviously enough on what is being characterized. Roughly put,  “strawness’ is a relative thing and what might be a straw man characterization of one person’s position could very well be an accurate description of another person’s view. As such, a person can be wrongly accused of presenting a straw man because the accuser is mistaken about which position the accused is actually describing. I have even noticed that people sometimes assume that the writer must be writing about them when, in fact, the writer is not.

So, before crying straw it is a good idea to see what the person is actually characterizing. While it might seem to be distorted or exaggerated it might really be spot on.

While most straw men are distorted versions of specific views, there is also variation of the straw man which involves presenting a position that “no one” actually holds and attacking it. In many cases, these positions are attributed to vaguely identified groups (feminists, liberals, conservatives, etc.)  rather than specific individuals. While it is obviously legitimate to point out when people do this sort of thing, it should be determined whether the person is actually setting up such a generic straw man. As noted above, there are views that are really held that would tend to seem like willful distortions on the part of the person describing them.

There are various other ways to use straw men, but I’ll leave those for people to bring up in comments.

Switching now to lies, I have noticed that when I teach this fallacy my students inevitably ask about the difference between presenting a straw man and lying.

On the face of it, a straw man would be a form of lie. After all, a person knowingly presenting a distortion or exaggeration would seem to be engaged in an act of deceit that falls nicely within the kingdom of lies. As such, I do not see any significant problem with characterizing intentional straw men as involving a lie (or lies) as a component.  For example, when the health care bill Obama was supporting was characterized as establishing death panels and attacked on those grounds, then that would seem to qualify as both a straw man and a lie.

That said, there is more to a straw man than merely lying. As noted above, the straw man fallacy involves more than just presenting a distortion-it also involves rejecting the original on the basis of an attack on the distorted version.

The deceptive aspect of the straw man also brings in a moral element on top of the critical thinking element. After all, engaging in poor reasoning need not be immoral. However, the intentional use of deceit is often morally problematic (although, as people will no doubt point out, there are intuitively appealing exceptions). One obvious concern is that if a position is actually bad enough to morally require that deceits be used to attack it, then it would seem to follow that it could be justly criticized “in the flesh” rather than “in the straw.” No doubt there are exceptions to this as well-positions that are wicked or flawed and yet could not be defeated by arguing against them in their actual form.

While many straw men do involve intentional deceits, there are others that do not. These are cases that involve errors.

One obvious example of straw man by error is when someone tries to honestly characterize a view and simply gets it wrong because the view is rather difficult to understand. For example, I often see such straw men in student papers when they try to summarize the arguments of a philosopher.

Another example of straw man by error is when someone presents a straw man out of ignorance, sloppiness or some such reason. For example, a person might receive an email that distorts the Republican position on tax cuts and then go on to use that version in his blog. In this case, the person is not engaged in an intentional exaggeration.

To use an analogy, this could be seen as being a bit like counterfeit money. A person who knowingly creates a straw man is like a counterfeiter: she is created a deceitful product that she hopes others will accept as the real thing. Someone who accepts the straw man and unknowingly passes it on to others is like a person who gets counterfeit money and spends it herself, unaware that she is passing on phony money.

As with counterfeit money, the person who passes the straw man along in ignorance is not morally responsible for the deceit-she is acting in good faith and is also a victim. This, obviously enough, assumes that the person passing it on took a reasonable amount of effort to assess what was passed on to her.

Sticking with the money analogy, if I pick up some flawless counterfeit bills in my change at the grocery store and I pass them on to others when I buy things, I would seem to be an innocent victim. After all, the source is supposed to be safe and the bills pass all the tests I could reasonably be expected to us. However, if I am handed bills from a questionable person or the money looks a bit fishy, then I would be culpable (to a degree) for uncritically accepting them and passing them on to others.

If this analogy holds, then a person who passes on a straw man from others might be called to task for this or might merely be an innocent victim. In some cases it might be rather hard to determine which category a person falls into.

As one final point, people sometimes make the mistake of conflating errors and straw men. For example, I might claim that WikLeaks’ leak was a good thing because it revealed important new information to the public, such as the fact that Saudis provide considerable support to terrorist organizations and the fact that Pakistan also lends support to such groups. In response to this someone might say that I made a straw man because it is already well known that the Saudis and Pakistanis are supporters of terrorist groups.

However, there is a difference between merely being in error and making a straw man. To be specific, being in error is merely being wrong and a straw man is, well, what was defined above. In the example just given, I could be completely wrong (some have claimed that almost everything leaked was already available), however it would not be a straw man because there was no attempt to present a distorted or exaggerated version of a position. The main test (which is not perfect) is to ask what position, if any, is being distorted or exaggerated. If there are not plausible grounds for claiming an act of distortion has occurred, then it is more reasonable to claim that the person is wrong about the facts rather than accusing him of creating a straw man. Naturally, there will be gray areas in which it is not clear what is the most plausible explanation.