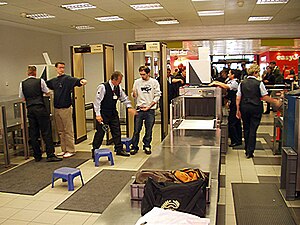 Currently, the United States does not use profiling in regards to airport security. True, there is a no fly list-a list that has included people who are obviously not terrorists (like American children and a well known CNN journalist) and has generally failed as  method of providing security.

It has been claimed that profiling is not used in the United States because of political correctness. While that might be true, some reasonable arguments can be given against profiling.

One argument is that profiling could be misused in order to target people for harassment on the basis of their ethnicity, religion, nationality and so on.  For example, suppose that Arabs were flagged as higher risk. This would allow security agents (like TSA folks) who do not like Arabs to harass them under the cover of these profiles (“I didn’t pull Abdul out for a special search because I hate Arabs, I did it because he fits the profile”).  This is, of course, the argument used against racial profiling by the police: it results in certain people being targeted more and also provides a cover for harassment.

This is a legitimate concern and is supported by the history of racial profiling in the United States.

Another argument is that  profiling is inherently unfair. After all, such profiles treat a person as a suspect based on factors such as ethnicity and religion rather than on the person’s actual actions. To, for example, pull all darker skinned people out of line for special screening because they have dark skin and let white folks go on through normally would be unfair. While profiling might result in increased security, it is no more justified than allowing the police to pull people over for DWB (Driving While Black).

While these arguments are well worth considering, there are also arguments in support of profiling.

In theory, it does seem possible for profiling to be an effective means of determining threats. After all, terrorists (and other threats) do not arise out of nothing. There are causal factors and other factors that would seem to be connected to such people. Also, there are factors that would tend to indicate that a person is not likely to be a terrorist or threat. To use an obvious example, an FBI agent travelling with her infant son is probably not going to try to take the plane down. In contrast, a young man from Saudi Arabia who is flying in from Yemen who spent a few years in Pakistan is more likely to pose a threat.

The profiling I will be arguing for is not just any sort of profiling. Rather, it is profiling based on proper research and statistical models. It also needs to be subject to rigorous assessment. I do consider the possibility that proper profiling might be beyond the capacity of today’s behavioral sciences and thus that at this time profiling might not be accurate enough to be justified as a security tool.

One argument in favor of profiling is that it enables a more effective use of resources. Rather than randomly pulling people out of line, people who are more likely to be threats can be subject to more attention. This would increase the likelihood that such threats would be caught. To use an analogy, rather than having the police just pull people over at random to check for drunk driving, it makes more sense to look for indicators of drunk driving, such as swerving about.

A second argument in favor of profiling is that it reduces the violation of rights and liberties. Under the current system, everyone is treated as a likely terrorist and subject to body scans or pat downs. With profiling, people who are more likely to be threats can be subjected to the more invasive means of checking.

It might be argued that singling people out would violate their rights. However, it can be countered that the current system is a greater violation. The current system is to treat everyone from the toddler to the grandpa as an equal threat. As such, if singling people out would be a violation, then it would seem that targeting everyone would be an even greater violation. To use an analogy, having the police randomly pull over any driver seems like a greater violation of rights than having the police pull over people who are most likely to be driving drunk.

Naturally, it could be argued that it is more unfair to single people out based on their being more likely to be a threat. After all, they are being treated differently than other people even though they might have actually done nothing to warrant such suspicion-that is, they meet the profile but are not actually a threat.

So, it seems to be a matter of whether it is better to treat everyone as an equal threat or to consider some people as greater threats based on profiling.