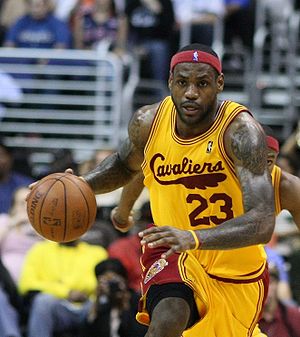 While I haven’t been interested in basketball since I played (badly) as a kid, I inadvertently learned way too much about Lebron James. This was, of course, due to the recent obsession in the media about where he would sell his ball handling services.

Along with the rest of the world I learned that he would be going to Miami and leaving Cleveland.  When I went to school in Ohio, Cleveland was known as the place where the river burned, “the mistake on/by the lake”, and “Columbus’ idiot brother.” This made me wonder what James was doing there, but I’m fairly sure that large stacks of cash were involved. In any case, his departure has made me a little sad for the folks in Cleveland-after all, they are no longer the home of the King, but back to just being a city which had a flammable river.

Speaking of mistakes, the media obsession over James seems to fall into that category. Sure, he is a great player and he gets paid vast sums of money to do what he does (and does it very well). However, what he does should be put in  perspective: he runs and jumps around on a court with a rubber ball. This hardly seems to be something worthy of such massive media coverage-at least outside of media devoted to sports. It does make sense for ESPN to cover this “story”, but for the “real” news channels to devote so much time to the “story” shows that the media folks either have way too much time to fill or that they really have no real sense of what should be considered news.

I do admit that he does play with great skill. As a vastly inferior athlete (at my best I was only all conference in college and never went pro) I respect his abilities. I also do agree that impressive athletic performances can be newsworthy. For example, if someone sets a new record for the marathon, then that is something I would consider worth covering, preferably in a short segment stating the record and perhaps a clip of the finish. However, the news coverage of James has not been of an amazing athletic performance but rather an obsession about where he would go. Hardly the stuff of real news.

Then again, perhaps it is news. After all, as millions of people are unemployed, one man is able to demand and receive a fortune to run and jump around on a court. This says a great deal about our culture and our values.