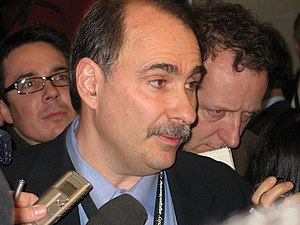 The Daily Show had an interesting segment on the political blame game. When David Axelrod appeared on the show, his comments fired up the fine folks at Fox. To be specific, they took Axelrod as blaming the Bush administration for the problems with the MMS (and other problems).

Jon Stewart responded by playing clips from Fox, in which various fine folks blamed Clinton for many of the problems that the Bush administration faced. From a logical perspective, he was pointing out that these folks do not seem to be operating from a consistent principle of responsibility. To be specific, if Clinton could be blamed for the woes of Bush, then it would seem to follow that Bush could also be blamed for the woes that Obama is facing. Likewise, if Bush is not to blame for what Obama seemed to have inherited, then Clinton would seem to be free from blame.

Naturally, it could be argued that there are relevant differences between the situations. Perhaps Clinton created problems that blossomed during the Bush years and Bush did not create such problems for Obama. However, this seems to be contrary to the known facts.

Turning back to the main topic, the key matter here is sorting out a principle of blame. Fortunately, there has been considerable work in legal theory regarding this and it is reasonable to see if this can be re-purposed for the situation at hand.

One aspect of placing blame is tracing a causal chain. Obviously, if a person had no causal role in bringing about a situation, then she cannot be blamed for that situation. If there is a causal connection between a person and a situation, then this creates the possibility of blame.

In the law, this involves what is known as “conditio sine qua non” (“a condition without which nothing”). This is also refereed to as a “but for cause”:  this would not have happened but for that. For example, the war in Iraq would not be happening but for the invasion during the Bush administration.

One rather obvious concern is that the causal chain for a situation can extend rather far. In fact, the causal chain might very well extend beyond the chain of blame. For example, the spill in the gulf can be traced back to the inventor of the oil well (and way beyond). However, to blame the inventor for the spill would seem unreasonable.

In the law, the usual solution is to address this matter in terms of what counts as a proximate cause. The solution proposed by  H.L.A. Hart and A.M. Honore is that common sense can be used to settle such concerns. To be specific, for a person to be responsible for a harm, the harm must be traceable back to the actions of that person.

In the political blame game, it is common to present blame in an all or nothing way. For example, the blame is placed on one administration (or one president). However, blame tends to be more distributed. In the case of the oil spill, it can be traced back to policies (or lack of policy) going back over the years. Likewise, the blame can also be traced back across time and administrations.