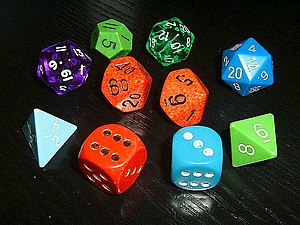 I’ve been a gamer (video games, RPGs, war games and so on) since I was 15. As such, I’ve had to listen to people make fun of gaming and gamers for quite some time. Fortunately, things have been much easier now that video games are cool and big business. However, I do find that my hobby is still subject to criticism.

One stock criticism is that gaming is a waste of time because it does not accomplish “real” things. Gaming is, by its very nature, fake. In the case of video games, the worlds are virtual. In the case of role playing games, it is all in the players’ heads.

Of course, this charge is not specific to gaming. After all, almost all forms of entertainment can be accused of the same thing. Watching other people play sports does nothing real. Nor does watching a movie. Nor does watching TV.

Naturally, saying that gaming is in good (or bad) company does not defend it very well. However, it can be argued that gaming does accomplish something real. After all, relaxation and entertainment are real and humans need both of them. Whether they are acquired via rolling twenty sided dice and pretending to be an elf or by watching men battling over a ball does not really matter. As such, gaming at least has this value.

Gaming also has more going for it than passive entertainment. Unlike watching sports (and swilling beer), a gamer is involved in an activity-so he is at least doing something and not merely a spectator.

Another stock criticism is that gaming is make believe. Of course, the same can be said about many other forms of entertainment. Books, movies, TV shows and so on are often make believe as well.  As such, this hardly a special criticism of gaming.

Another criticism is that gaming is for kids. While there are some games for kids, there are games that are clearly not intended for children. Of course, it could be argued that these games are just kid stuff with serious content and adults should put away such childish things rather than repaint them in grown up colors.

This does have some plausibility. After all, play is something associated with children and perhaps adults should not engage in play. That is, adults should give up sports and games of all types so as to be properly adults. After all, think about sports spectators and athletes. The fans are often screaming and acting like bad children while the athletes are playing kid games like baseball, football and soccer.

However, I think that this is a mistaken view. Adults need to play as well, otherwise (as the saying goes) we become dull (and crazy). If we can still watch and play baseball as adults, then it seems that we can also play games like D&D, Halo, and WoW.