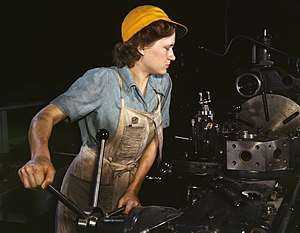 Traditionally, there has been no stigma attached to a man marrying a woman who has less education and income. In fact, that is the way how it generally has been throughout history and women generally strove to “marry up.” The reverse, however, has not been true. A man whose wife makes more than him tends to bear a mark of shame for this failing as a man. After all, the sugar is supposed to be a daddy and not a mama.

On the positive side, this can be taken as showing that society is becoming more equal in terms of gender. That is, women have more opportunities and better salaries than in the past. Given how expensive living is these days, this can be good for the husband.

On the negative side, part of the trend of women making more than their husbands can be attributed to the fact that the economic mess has hit traditional male jobs harder. As such, the wife might be making more because the husband is making less. However, even with this factored in, the trend can be seen more of the result of gain by women as opposed to a loss by men.

One reason why women are making more is that women are better educated than in the past. In fact, at the level of two and four year degrees, women are now the majority. This means that there are more marriages in which the wife is both better educated and better paid than her husband.

While women being better educated and better paid are good things, this does lead to concerns when it comes to relationships. While times have changed, attitudes tend to lag a bit behind. Women still seem to prefer to marry men whose education and income at least match their own. Male pride, of course, still moves men to prefer to be the breadwinner. As such, women are likely to find it more difficult to find a husband whose income and education match (or exceed) her own. If a woman marries a man with a lower education and income, then the likelihood of marital problems will increase. After all, there is the matter of male pride and the fact that money is often a source of conflict in marriages. While a disparity in education does not entail a disparity in intelligence, it can also be a source of problems.

For educated men who have high incomes, this situation might be a good thing. After all, they will be the smaller supply in a higher demand situation. It could also be a good thing for men who are willing to accept being the lower earner. After all, having a higher income partner means a better economic situation. As such, men who are able to adapt to the changing social conditions will be better off than those who cannot (or will not).

If the trend continues, we might see the rise of the sugar-mamas. This would certainly be an interesting reversal of roles, but perhaps not a very enlightened one.