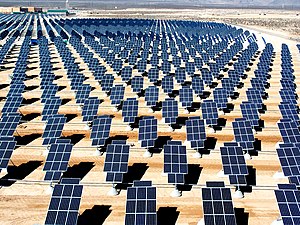 I first learned about solar power as a kid. My parents had given me a science kit consisting of these “blocks” that could be used to make various circuits and even devices such as a working radio. One of the blocks had a tiny solar panel on it and I remember being amazed that light could be turned into power.  For a while I was on a solar power kick. For example, if I made a “robot” out of tinker toys, I would say that it was solar powered. While I eventually moved on to other things (like nuclear power), solar power never lost that initial hold on me.

Fast forward to 2010. Solar power makes up only a sliver of power production in the United States. While other countries use it to a greater degree, this is based on significant government subsidies, which shows one reason why it is so rare in the States: it is very expensive. In my own case, I actually priced getting solar panels on my house. Part of this was because of my childhood. Part of it was because I like the idea of having my own power source. Part of it was also because solar is very environmentally friendly (well, aside from making the panels…). But the price…that trumped all these factors.

I have heard that there are subsidies for solar power in some areas and also ways to “rent” the panels. Of course, this saves money in the classic way of robbing Peter to pay Paul. While it would cost me less to have the other taxpayers foot some of the bill for me, that strikes me as rather unjust. After all, I do not expect people to subsidize my grocery bill so why should they subsidize my power bill? I also suspect that these subsidies are the result of political dealing-that is, lobbyists have been hard at work making it possible for companies to get that public money.

Of course, the state does subsidize many things. For example, ethanol is subsidized heavily, agriculture is heavily subsidized, and so is the petroleum industry. So, in a way, most of what I use is already being partially supported by our tax dollars. However, my inclination is to not accept such a common practice as right simply because it is common. In fact, I would prefer to pay more for what I want if that would allow me to pay less in taxes that end up in the coffers of various companies.

That said, I am willing to have my tax dollars contribute to developing cheaper and better solar power. This is because I think that solar power would be advantageous to the country and hence could be justified on the grounds of the public good. This can, of course, be argued against.

One final point worth considering is the matter of determining cost. As it stands, solar power is rather expensive when compared to coal and oil. However, this is based on what it costs to produce the energy in question and does not factor in other costs. Factors such as environmental damage, political costs (like wars), and tax subsidies are generally not factored in. However, if those other factors are included in the costs, then solar power would seem to gain significantly.

For example, there is the infamous oil leak that is going to inflict serious economic and environmental damage. All this is part of the price of oil. As another example, oil is one of the main driving factors in our involvement in the Middle East and thus a major factor in terrorism. All this is also part of the price of oil. This includes the soldiers and civilians who have been killed. As such, oil is rather costly. Solar power does not lead to environmental and economic devastation. Solar power does not require us to fight wars in foreign lands to protect the interests of solar power companies. Solar power does not provide terrorists with funding. As such, solar power and other alternative energy sources seem to be less costly that one might imagine.