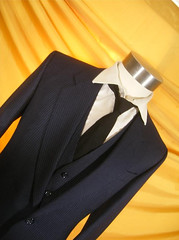 Apparently some men are having trouble figuring out what it is to be a man. There are various groups and individuals that purport to be able to teach men how to be men (or at least dress like the male actors on the show Mad Men).

One option is to take the easy and obvious approach: just go with the generally accepted standards of  society. After all, a significant part of being a man is being accepted as a man by other people.

On a large scale, each society has a set of expectations, stereotypes and assumptions about what it is to be a man. These can be taken as forming a set of standards regarding what one needs to be and do in order to be  a man.

Naturally, there will be conflicting (even contradictory) expectations so that meeting the standards for being a man will require selecting a specific subset. One option is to select the ones that are accepted by the majority or by the dominant aspect of the population. This has the obvious advantage that this sort of manliness will be broadly accepted.

Another option is to narrow the field by selecting the standards held by a specific group. For example, a person in a fraternity might elect to go with the fraternities view of what it is to be a man (which will probably involve the mass consumption of beer). On the plus side, this enables a person to clearly  be a man in that specific group. On the minus side, if the standards (or mandards) of the group differ in significant ways from the more general view of manliness, then the individual can run into problems if he strays outside of his mangroup.

A third option is to attempt to create your own standards of being a man and getting them accepted by others (or not). Good luck with that.

If being a man is purely a matter of social construction (that is, we create and make up gender roles) than being a man in group X simply involves meeting the standards of being a man in group X. If that involves owing guns, killing animals, and chugging beer while watching porn and sports, then do that to be a man. If it involves sipping lattes, talking about Proust,  listening to NPR  and talking about a scrumptious quiche, then do that. So, to be a man, just pick your group, sort out the standards and then meet them as best you can.

In many ways, this is comparable to being good: if being good is merely a social construct, then to be good you just meet the standards of the group in question.

But perhaps being a man is more than just meeting socially constructed gender standards. If so, a person who merely meets the “mandards” of being a man in a specific group might think he is a man, but he might be mistaken. I’m reasonable sure this happens often. (You know who you are…don’t deny it.)  This is, of course, a subject for another time and another blog.