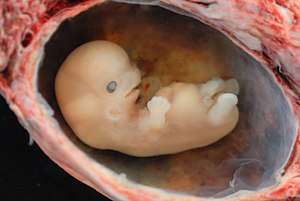 The state of Nebraska has added a (seemingly) new phrase to the abortion debate, namely “fetal pain.” The gist of the view is that abortions after twenty weeks should not be allowed on the grounds that the fetus might feel what is happening to it.

While it is not known exactly when a fetus can feel pain, the Journal of the American Medical Association asserts that it is unlikely that the fetus feels pain prior to twenty eight weeks. The question of when a fetus has sufficient neurological development that would allow it to experience pain would certainly seem to be an empirical matter. Of course, the situation can be made more complicated by bringing in metaphysical concerns about when the fetus has a mind that can actually experience pain and suffer from such pain (there might be an important distinction between feeling pain and suffering from pain).

Determining when the fetus can feel and suffer from such pain does seem important. After all, many moral arguments are based on the capacity of beings to experience pain. For example, stock arguments in the moral debate over the treatment of animals rest on the fact that many of the ways we treat animals (such as how we raise them as food) causes them pain and suffering.

On a logically irrelevant note, this could mean that folks who are pro-choice but against animal suffering might find their own arguments against mistreating animals re-purposed to argue against abortions. Likewise, folks who are anti-abortion but argue for the moral acceptability of (mis)using animals might find their arguments for allowing animal suffering to be re-purposed and used against their anti-abortion views.

Getting back to the main discussion , it does seem that pain and suffering are morally relevant. Intuitively, this makes sense. To steal an approach from Hume, simply think of your own pain and suffering and see if you can regard these as good things. It is also easy enough to take advantage of numerous existing arguments for pain and suffering having negative moral value (Mill is the obvious choice here). Naturally, there are also good arguments against this, but it hardly seem foolish to consider that inflicting pain and suffering tends to be morally wrong.

I suspect that the main result of the introduction of “fetal pain” into the legal battle will not be a significant change in the ethical debate. Rather, the main impact will be that a (seemingly) new rhetorical tool (or weapon, depending on your view) is now available.