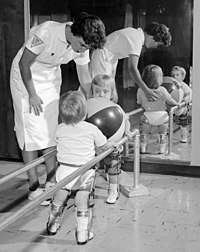 I am now one month out from the quadriceps tendon repair surgery. Yesterday I had yet another appointment and my brace was opened up to 70 degrees of flexion. I can’t bend it that far, yet. As you might imagine, after a few weeks with my leg locked in place, my knee is reluctant to bend. In fact, bending it feels very much like lifting weight. Or perhaps more like trying to bend my knee with a huge rubber band taped to it. Suffice it to say that moving it ain’t easy.

I suspect that the difficulty is a combination of a few weeks of immobility plus the fact that my tendon is now shorter. The tear is repaired by anchoring the tendon to the knee with surgical thread until it attaches on its own. So, getting it to bend is both a matter of working on flexibility and probably also getting the tendon to lengthen a bit.

Since the lower leg is under tension, I’ve found that if I pull it back it will pop forward like a catapult. Surprisingly, my cats really enjoy being catapulted across the room-I just place a cat on my foot, pull it back and zip, there goes a cat. It did take a while to get my aim and power down right, as a few cat size holes in the ceiling will attest. I’m sure PETA would be thrilled. I’d be happy to give them a ride, too.

I start physical therapy on May 11. I’m sure that will be suitably painful. I’m working at having full range of motion by then so that the PT won’t have to “help” me by applying a winch or something to my lower leg. My prescriptions says I’ll be in PT for six weeks and I have about another eleven weeks of visits to the doctor’s office (although it is now down to a two week interval). It will be good to be back to normal. Well, as normal as I get.

Americans have long been  accused of having inflated egos, but it has recently become popular to accuse Americans of being narcissistic. This narcissism is now seen as being primarily an affliction of the young; although baby boomers are often seen as being able to give them a run for their money.

Some of the evidence for this is statistical.

Apparently 10% of folks in their 20s have had symptoms of narcissistic personality disorder (compared to 3% of those 65 and older). Of course, it could be the case that youth naturally tend to have this symptoms and then outgrow them. However, if the current generation of kids is actually suffering more from such symptoms, then this would be a matter of concern.

Since many 20 somethings are in school, it is not surprising that much of the alleged evidence of narcissism involved education. As one example,  30% of college students believe that showing up to every class entitles them to a grade of B or better. There are also various bits of anecdotal evidence. For example, it is claimed that students now seem to be more inclined to expect make-up tests for when they miss class for no good reason (such as being too drunk to take a test).

In regards to the first question, I will rely on my experience as a professor. Overall, I would say that I have seen roughly the same degree and type of allegedly narcissistic behavior over the past eighteen years. For example, when I was a graduate student at Ohio State (1989-1993), students would ask me to arrange make up exams for them at special times and would argue that they should not fail because they did not want to fail.  I’ve seen the same as a professor (1993-now).  Over the years, I’ve also dealt with roughly the name number of incidents in which students have claimed that they deserve a good grade merely for attempting to do the work and showing up. Of course, this evidence is anecdotal and my sample might be biased in some ways.

I must admit that every semester I hear other faculty at my school and other schools talk about how the students get worse every year. However, I think that much of this is due to perception rather than a real difference. Having heard this so often, I’ve gone back and checked my grades over the years. What I found was that the grades tend to be about the same; although there are some individual classes that deviate from the norm (which is exactly what one would expect). I’ve also thought about the incidents that would seem narcissistic and the rate seems to have been fairly constant.

To explain this, people seem to have a natural tendency to “remember” things the way that they were not. For example, people talk about how good things used to be back when they were kids. Likewise, people tend to believe that people have gotten worse. However, that seems to be mostly a matter of selective memory.

Now, to the second question. Is the behavior in question really narcissistic? Obviously, this depends on what is meant by the term. It is tempting to slap labels on things in order to make things seem more dramatic or to sell books, but such labels should be carefully considered.

Many thinkers have argued that people are selfish and desire gain they do not deserve. In the Republic, Glaucon argues that people naturally want undue gain and are focused on their own good. However, such behavior seems to be selfish rather than narcissistic. Hobbes goes even further: he contends that people are psychological hedonists who are motivated only by gain or glory (the boosting of their ego). While such behavior could be described as narcissistic, it makes more sense to just stick with calling it selfish.

Narcissism certainly seems to go beyond merely being selfish or having unrealistic expectations about how people will treat you (such as giving grades or special make-ups). There are, obviously enough, people who are narcissistic, but this is nothing new.