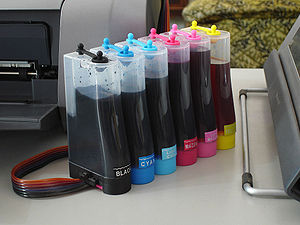 Last year I gave away my old (1990s era) color inkjet printer. I found I wasn’t using it and a colleague needed a printer. Recently I decided that I now had a need to do some color printing, so I bought a HP Officejet Pro 800 Wireless, mainly because PC World lauded the low cost of its ink.

After getting it, I set it up and printed a few things. After finishing for the day, I shut down my PC and turned off everything. As I mentioned in a much earlier post, I make a point of plugging my electronics into surge protectors to protect them but also so I can shut them off completely. This has always worked well, at least until now.

I noticed that when I powered up my system, the printer would grind away, doing something. I then noticed that the ink levels kept dropping, although I was only printing a page or two now and then. Then I figured it out-the damn printer was going through some sort of cleaning cycle or something every time it was powered up. Presumably this involves spraying relatively large amounts of ink around, thus providing yet another way to sell even more expensive ink.

To fix this problem, I plugged the printer into its own surge protector and simply leave it on. When I need to turn it off, I am careful to use its own power button (which I dislike-since it is not a true switch I can never be quite sure if I am turning it off, putting it in standby, or just giving it a cheap thrill). Of course, when my power goes out (a common event in Florida) I can hear it burning through the ink when the power comes back on.

I’m tempted to just give this printer away and get a color laser printer. It will cost me more upfront, but at least it won’t be burning through its consumables just because the power flickers.