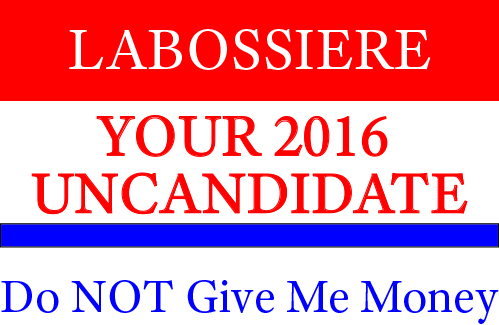 America, it has been said, needs to be taken back. Or held onto. Or taken on a long walk on the beach. Whatever the metaphor, there is a pack of Republicans competing madly for the chance to be put down by Hilary Clinton. Among Democrats, only the bold Bernie Sanders has dared to challenge the Clinton machine. He will be missed.

One narrative put forth by some Republican candidates is the need for someone not beholden to special interests, an outsider who is for the people. That seems reasonable. Looking around, I don’t see too many of those. None actually.

Among the people (that is, us) there are longstanding complaints about the nature of politicians and folks regularly condemn the regular activities and traits of the political class. People ask why the sort of folks they claim to really want don’t run, then they vote for more of the same politicians.

It is time that America had a true choice. A choice not just between candidates of the two political machines, but between actual candidates and an uncandidate. I am Mike LaBossiere and I am your 2016 Uncandidate.

It might be wondered what it is to be a presidential uncandidate. One defining characteristic is the inability to win the election, but there is obviously more to it than that. Otherwise Ted Cruz and Mike Huckabee would also be uncandidates.

What truly makes an uncandidate is that he exemplifies what voters claim they want, but would assure catastrophic defeat in the election. I’ll run through a few of these and show you why I am an uncandidate for 2016. You can decide if you’d like to be one, too.

One of the main complaints about politicians is that they are beholden to the money that buys them the elections. As an uncandidate, I have a clear message: do not send me your money. If you are like most people, you need your money. If you are a billionaire or PACmaster, I am not for sale. If you find you have some extra cash that you do not need, consider asking a local teacher if she needs some supplies for her classroom or donating to the local food bank or animal shelter. Do some good for those who do good.

My unwillingness to accept money is certain defeat in the political arena—the presidency is now a billion dollar plus purchase. But, I am an uncandidate.

People also complain about the negativity of campaigns. While I will be critical of candidates, I will not engage in fear mongering, scare tactics and straw man tactics through slickly produced scary ads. Part of this is because of the obvious—I have no money to do such things. But part of it is also a matter of ethics—I learned in sports that one should win fairly by being better, not by whispering hate and lies from the shadows.

Since I teach critical thinking, I know that people are hardwired to give more weight to the negative. This is, in fact, a form of cognitive bias—an unconscious tendency. So, by abandoning negativity, I toss aside one of the sharper swords in the arsenal of the true politicians.

Interestingly enough, folks also complain that they do not know much about the candidates. Fortunately, I have been writing on this blog since 2007 and have written a pile of books. My positions on a multitude of issues are right here. I was also born in the United States, specifically in Maine. The blackflies will back me up on this. While willing to admit errors, I obviously do not shift my views around to pander. This is obviously not what a proper candidate who wants to win would do.

Apparently being an outsider is big these days. I think I went to Washington once as a kid, and I have never held political office. So I am clearly an outsider. For real. Often, when a person claims to be an outsider, it is like in that horror movie—the call is coming from inside the house (or the senate). Obviously enough, being connected is critical to being elected—I’m unconnected and will remain unelected.

So, I announce my uncandidacy for 2016. I am not running for President because 1) I actually have a job and 2) I would totally lose. But, I encourage everyone to become an uncandidate—to be what we say we want our leaders to be (yet elect people who are not that anyway).

I’ll be unrunning my uncampaign online throughout 2015 and 2016. Because that is free.

Remember: do NOT give me money.

You can, however, buy my books.