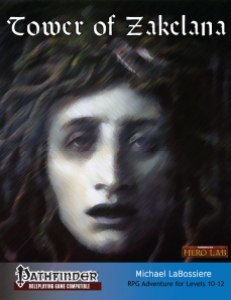 Roughly three centuries ago the young Zakelana began her adventuring career as a wizard. She was well known for her gift for turning foes to allies and for having a rather broad definition of what counted as a legitimate target for adventuring. This approach earned her the anger of many powerful people who sent assassins or monsters to exact their vengeance. Whenever possible, Zakelana attempted to persuade any would be killer to switch sides. The best known example occurred when a rival mage send a creature to torment Zakelana in her dreams. According to the tale, Zakelana was able to win over the creature with the gift of a pony named “Giggles.”

In her later years, she retired from adventuring and one day she simply vanished. Some speculate a final experiment failed and banished her eternally to some other dimension. Another tale relates how one of her many enemies finally killed her. In any case, she vanished but left behind a tower and a magical gateway to the space containing the tower. Some tales claim that the guards of the tower are monsters that Zakelana won over but could not allow to roam freely. The tales also speak of the great wealth and magical secrets within the tower.

Tower of Zakelana is a Pathfinder Role Playing Game compatible adventure. It is intended for a party of 10th-12th   level characters.

Here are some of the features of the adventure:

Available at the Paizo store.