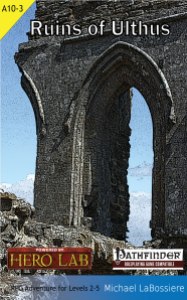 After the Empire expanded into the Aegus region via the transport towers, Imperial scouts searched for valuable resources. Investigating tales about a mountainous island containing wealth and monsters, Imperial scouts (Althus, Altus, and Ulthus) located caverns that contained rich veins of copper-already being mined by Troglodytes. Eager for the resources, the Empire slaughtered many of the troglodytes and enslaved the rest as miners. A small village, Ulthus, grew up around the mines and a large town, Altus, grew on the coast. The influx of wealth enabled the town to thrive and even construct a theatre for the entertainment of the people. While the theatre was originally a place of the finer arts, as the Empire became more debased, so too did the performances. Eventually, corruption spread throughout the town, infecting even the church.

When the Cataclysm struck, Altus was cast into ruin. The theatre and those who frequented it became the focus of much of the curse. They were transformed to match the evil and depravity in their souls, creating a dangerous and vile show upon the accursed stage. The church also met a terrible fate, becoming a haven for undead beings.

While Ulthus was mainly spared the direct effects of the Cataclysm, the destruction of Altus gave the troglodytes the chance they had been waiting for. They rose up and fought their enslavers. The battle was brutal and costly, but eventually the troglodytes won and were free to go back to enslaving their own kind to work the mines for their mysterious masters.