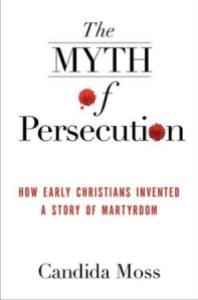 In her book, The Myth of Persecution: How Early Christians Invented a Story of Martyrdom, Candida Moss argues for her claim that the early Christians created a myth whose legacy still impacts the world today.

She begins the book with the story of the December 31, 2010 murder of Mariam Fekry and this sets the stage for the discussion that follows. Mariam, a Coptic Christian, was cast by some as a martyr and the bombing that killed her was presented as an attack on Christianity itself.  This attack, some claimed, warranted divinely sanctioned retribution. Moss contends that this way of thinking is grounded in the myth of persecution and she spends the remainder of this book examining this subject.

Moss’ main claim is that the commonly held view that “Christians huddled in catacombs out of fear, meeting in secret to avoid arrest and mercilessly thrown to lions merely for their religious beliefs” is simply untrue. She spends much of the book endeavoring to support her claim.

She starts her argument by considering martyrdom before Christianity and tracing its likely influence on the Christian views of martyrdom.  Naturally, she notes that there was no ancient word for “martyr” but makes an excellent case that the concept was well understood even in the ancient world.

As a philosopher, I found her analysis of the deaths of the philosophers (most notable Socrates) interesting. I

did, however, find her assessment of the death of Socrates problematic in some ways (such as her claims about his philosophical views). On the whole, however, Moss does a reasonably good job tracing the likely influences on the Christian concept of martyrdom from the ancient world. This is, of course, not new—philosophers have noted the connection between Socrates (and Plato) and Christianity for quite some time (some thinkers referred to them as being “Christians before Christ”). However, Moss does a good job focusing on the specific connection as it relates to martyrdom (rather than, for example, metaphysics).

After considering the non-Christian influences, Moss then turns to making a direct case that persecution is a myth. She does this by considering the available evidence and takes it to show that the Christians were not, as a matter of fact, persecuted in the manner that has become the received view. She notes that from the death of Jesus to the time of Constantine Christians were only sporadically subject to the attention of the Roman authorities and that this attention was not consistent in terms of its harshness or lack thereof. That is, the Roman Empire did not engage in what would legitimately count as persecution of Christians.

Moss then focuses on the six allegedly “authentic accounts” of the first Christian martyrs, such as Polycarp and Felicity.  One of her methods in assessing the plausibility of these accounts is to look for anachronisms such as attacks on heresies that post-dated the story or references to traditions that did not exist at the time when the story allegedly took place.  Another method she employs is to look for errors in the stories in regards to what we now know about Roman society (or details that are inconsistent with likely behavior). While these methods do not provide complete support for her case (after all, such inconsistencies could be explained away), they do lend credence to her claims.

Another important method she employs is what can be regarded as an argument by definition. That is, she considers what would actually count as persecution and examines the available evidence to see if the treatment of Christians would count as persecution rather than prosecution.  She carefully makes the case that although some Christians were sometimes subject to brutal punishments this does not entail that they were persecuted. A key part of making this case is arguing that the Christians who were prosecuted were treated in such a manner not because of a campaign of persecution against Christians as Christians. Rather, it was because the specific Christians in question acted in ways that were punishable under general Roman law (like refusing to accept the authority of the Roman officials).

Obviously enough, this approach is only as good as the historical data used to make the case. As such, a potential weak point lies in the fact that our information about this time is far from complete. Of course, this is also a problem for those who would claim that Christians were persecuted—they, too, have to draw on limited resources and engage in speculation. However, the weight of the evidence (at least as presented by Moss) seems to favor the view put forth in the book.

Moss heads into the end section of the book by arguing that the notion of Christianity as a persecuted faith was manufactured almost entirely in the fourth century and later. Interestingly enough, this was when the faith was doing quite well. Moss claims that the reasons for the development of the myth included the desire to have a rhetorical tool against heretics (having a martyr praise the orthodox and condemn the heretic was the equivalent of a celebrity endorsement and condemnation) as well as to provide the equivalent of a horror story to entertain the faithful.

While the majority of the book makes a reasonable strong case for Moss’ thesis, the end of the book is somewhat disappointing. In fact, it almost feels as if it were hastily tacked on in an attempt to make the book more relevant to today and to appeal to a more diverse audience.

Disappointingly, Moss moves rather too quickly through her short examination of the legacy of this myth. While she does briefly note some of its harms (such as how it enables powerful Christians to claim that they are being victimized and thus feel justified in refusing to tolerate their critics), this section is more of a lost opportunity than a significant success.

While I do agree with her assessment of the matter, her case is not particularly strong. She spends a significant portion of the last section involves a personal anecdote about overhearing two students condemning a nine year old girl who received an abortion after being raped by her stepfather.  While I do understand the rhetorical power of an anecdote, such an appeal to anecdotal evidence is at best logically weak. It is not for nothing that the appeal to anecdotal evidence is a classic fallacy.

If the anecdote had been backed up by more significant evidence of the effect in question, then her case would have been considerably stronger—after all, this is an academic work rather than a discussion of her personal experiences. It also has the unfortunate potential of creating the impression that she is relying so strongly on an anecdote because she lacks solid evidence.

Moss ends on an optimistic note that revealing the myth as a myth will help undo its legacy. Somewhat ironically, she makes a strong case against her optimism in the preceding chapters by noting how eager some people are to embrace and employ the myth.  Perhaps the greatest irony is, of course, that those who give her case due consideration are already reasonable people while those who most need to be “cured” will probably just regard the book as a work aimed at persecuting Christians.

Overall, I found the book informative, well-reasoned and approachable. I would certainly recommend the

book to anyone who would like to consider a rational case aimed at exposing the myth of persecution.

The Myth of Persecution tour schedule