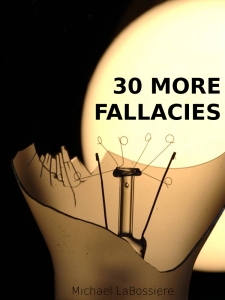 Thanks to the budget cuts to education, I am not teaching this summer. While I did consider practicing “would you like fries with that?”, I decided to finish several book projects that have been languishing due to my teaching load. The most recent is 30 More Fallacies, which is a companion to 42 Fallacies.

The book, as the name states, presents thirty fallacies. It is available via Amazon and Barnes & Noble. It is priced at a bank breaking 99 cents (just over three cents a fallacy).

Here is a sample:

This fallacy occurs when a conclusion is drawn from a premise or premises that are ambiguous due to a lack of clarity regarding the emphasis.  Most commonly this fallacy involves an ambiguity arising from a shift in emphasis/accent in the course of the argument. This fallacy has the following form:

1)      Premises are presented that are ambiguous due to a lack of clarity regarding emphasis.

2)      Conclusion C is drawn from these premises.

Ambiguity by itself is not fallacious, but is a lack of clarity in language that occurs when a claim has two (or more) meanings and it is not clear which is intended. The Fallacy of Accent occurs when an inference is drawn from a premise or premises on the basis of a specific sort of ambiguity that arises in three main ways.

The first is that a claim is ambiguous because the intended tone is not clear. For example, the claim “you would be lucky to get this person to work for you” could be high praise or a sarcastic remark depending on the tone used. The second is that the ambiguity arises from a lack of clarity regarding the intended stress. For example, the meaning of the claim “Leslie thinks that Sally has been faithful to him” can shift based on the stress. Stressed one way, the claim can be taken as indicating that Leslie thinks this, but is wrong. A third possibility is that claim is taken out of context. As an example, suppose that the original text was “Among the radical left, Mr. Jones has considerable appeal as a congressional candidate. However, mainstream voters rightfully regard him as a questionable choice, at best.” If someone were to quote this as “Mr. Jones has considerable appeal as a congressional candidate”, then they would be taking the quote out of context.

Perhaps the most used example of this sort of fallacy involves a hard drinking first mate and his teetotaler captain. Displeased by the mate’s drinking habits, the captain always made a point of entering “the mate was drunk today” into the ship’s log whenever the mate was drunk. One day, when the captain was sick, the mate entered “the captain was sober today” into the log. Naturally, the mate intended that the reader would take this emphasis as an indication that the event was unusual enough to be noted in the log and thus infer that the captain was drunk on all the other days. Obviously, to believe that conclusion would be to fall victim to the fallacy of accent.

Sally: “I made Jane watch Jennifer Aniston in Just Go With It last night.”

Sally: “She said that she never wants to see another Jennifer Aniston movie.”

Ted: “But you love Jennifer and have all her movies. What are you going to do?”

Sally: “I’ll do exactly what she said. I’ll make her watch Just Go With it repeatedly.”

Sally: “Not at all.  She did say that she never wants to see another Jennifer Aniston movie and I’ll see to that by making sure that she watches that movie rather than another.”

Dr. Jane Gupta (on TV): “Though Prescott Pharmaceuticals claims that their VacsaDiet 3000 is ‘guaranteed to help you shed those unsightly pounds’, this claim has not been verified and many of the ingredients in the product present potential health risks.”

Stephen: “Yes she does. You just missed her-she was on TV talking all about diets and stuff.”

Bob: “I’m sorry I missed that. By the way, do these new pants make me look fat?”

Stephen: “No, your fat makes you look fat.”

Employer: “I wasn’t sure about hiring you. After all, you were at your last job just a month. But your former employer’s letter said that anyone would be lucky to get you to work for them.”

Employer: “I’m sure you will. Welcome to the company.”