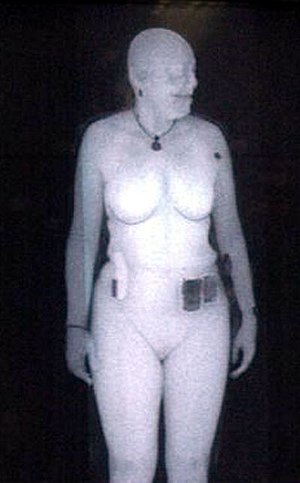 Since I am not fond of heights or delays I am not a big fan of flying. I am also not fond of being irradiated or groped by strangers. While this was generally not a problem with past flights,  the TSA (Theater of Security in America) has added them to our travel routine.

Starting soon, you will get a choice between a full body scan or having your (once) private areas handled by a TSA agent. While I am not overly worried about the radiation levels of the scanners (although this does raise some legitimate medical concerns), my main concern is over how this seems to violate well established rights to privacy.

A full body scan or a thorough pat down seem to violate some basic legal and moral privacy rights, namely the right to not have other people see beneath your clothing or place hands on your body (especially your groin area). As such, these new techniques seem to be morally incorrect and most likely unconstitutional.

It might be replied that these scans and probings are with our consent and we have the option not to fly (after all, people can drive, take the bus, run, walk or bike). Of course, this is a rather forced consent: you can be scanned/groped or miss that crucial business meeting, spend hours driving, or take a ship when you need to cross an ocean. As such, the idea that we consent to this treatment is rather absurd.

It might be argued that the police do search people using more invasive methods and this has stood up legally and morally. Even granting this, the police use of such techniques is justified on the grounds that the person is suspected of a crime that warrants such a search or the context (such as being in prison) justified this. In the case of flying, the passengers are not suspected of a crime nor would it seem that they are in a context that justifies such treatment. In short, the intrusion does not seem to be adequately justified.

Laying aside the obvious question of whether the cost is worth the gain, there is also the question of whether these methods will make us safer. Interestingly, as many other have pointed out, the Israelis do not use these methods. Of course, the Israelis might be in error. However, I am inclined to think that these methods will not prove effective. One obvious reason is that the existing techniques will tend to find (or not find) the same sort of things that these invasive methods would find. Another obvious reason is that these methods do nothing in regards to luggage or cargo, which seem to be more likely avenues by which dangerous things might be brought on board. In short, it seems that there will little if any gain in security. As such, it does not seem worth violating privacy or funding the scanners.

Also, consider this: there are all sorts of places inside the human body where things can be hidden (drug traffickers do this). A terrorist could have an explosive enema device. A female terrorist could have bombs implanted in her breasts. A person could swallow a bomb. To defend against these, we clearly would need cavity searches and penetrating x-rays (perhaps even MRIs). For the folks who insist that we need pat downs to be safe, think about the TSA sticking a finger in your rectum or giving your breasts a thorough work out to make sure they are real.  That would make us even safer. Demand it next time you fly.

A final factor worth considering is that people already hate to fly and this will no doubt increase the hate. While people will still travel (because they must), I suspect that some people will rightfully refuse to be subject to these needlessly intrusive techniques. I was already sick of the security theater and adding a peep show and grope fest to it merely makes me hate it even more. I suspect other people think the same way and that at least some of them will decide to stop flying until this stupidity is undone.

I do wonder why these methods are being implemented. After all, there seems to be no need for them and they are needlessly invasive. Jokingly, I might even suggest that the government folks just enjoy screwing with us (“Hey, I got them to take off their shoes. Top that! I will, I’ll have them groped!”). Or maybe they think that we will feel “safer” by having ineffective security measures inflicted on us. Or maybe the Tea Party is right: the state just wants to get in our business (or at least grope it) and impose tyranny.

Perhaps it is a good thing that the Republicans and Tea Party made gains in the recent election. Surely, with their small government views and their cries about getting government off our back, they will leap into action to get the hand of the state off our groins. This would be a clear way for them to prove that they mean what they say and that they are not just blowing tea steam. We can, as the Israelis have shown, have effective security without such invasions. As such, they cannot have recourse to the excuse of security to justify the violations of liberty. So, put that in your teacups and drink it. Or don’t and STFU about tyranny and liberty.

I am willing to admit that if these methods were effective and if there was a sufficiently high probability of a terrorist attack using methods that could be detected by these methods, than I would be willing to change my mind. However, this is not the case. So, I call on the folks in charge to change these rules. If not, well, I am sure that the airlines do not need my money nor the politicians my vote.

I say that enough is quite enough. Our founders said “don’t tread on me.” Now, I say, “don’t grope me.”