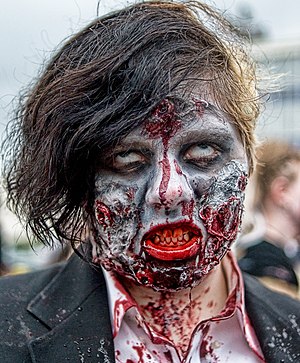 I just finished watching the first episode of AMC’s new zombie apocalypse series (zombalypse, perhaps). Since I am very fond of zombies, I liked it by default. My first impression was that it was either ripping off other zombie films or paying them homage (often hard to tell). It had the “dude wakes up in a coma to find zombies” from 28 Days. It has the cop character from Dawn of the Dead. It has the “zombies can only be destroyed by head shots” thing from almost all zombie flicks. It also had the “ragtag band of survivors” theme going. It also throws in the usual post-apocalyptic stuff as well as some drama (the cop’s buddy is now with the cop’s wife-I can see where that is going). Overall, fairly standard zombie+apocalypse stuff. But, I’m a sucker for both genres  and I’m working on my my zombie stuff ((Un)Living in Deadtime) so I like that there is a now a regular series about a zombie world. This will give my Romero DVDs a well deserved break.

Since I’ve written a thing or two about zombies, horror and the end of the world, I’m aware of the challenges in pulling of a plausible scenario while also hitting all the socially expected points. Just to ramble a bit, a few problems I’ve seen in almost all zombie flicks are as follows:

First, the zombie condition is usually spread by a bite from a zombie. This would seem to restrict the speed at which it spreads, making it difficult to accept that the zombies are able to overrun civilization. So, in my zombie apocalypse scenarios, I usually rely on a contagion that can be spread by “traditional means” and more directly by biting. Natural, the contagion takes a while to kill and re-animate, thus allowing a massive spread of the infection. By the time people know that the dead are re-animating and why, the infection is spread around the world, into military bases, onto ships and so on. This provides a plausible basis for an end of civilization scenario. Naturally, some folks are resistant to the contagion-after all, a world of only mindless zombies does not have many plot opportunities). I’ve also made use of limited zombie incidents (in Nightsiders, for example) that take place in isolated places-this allows the zombie contagion to be spread by bites.

Second, the zombie condition is usually spread by bites, yet (with the exception of one fellow in 28 Days) the survivors do not take the obvious step of making even basic armor. They run around in normal clothes, leaving plenty of exposed flesh. I suspect that the film makers don’t have the characters make armor (or raid museums and sporting goods stores) because they would look dorky as hell.

Third, the survivors seem to generally be random people with no special skills or preparation. While a random zombie plague could catch even the skilled and survival equipped types unprepared, logic would indicate that people with survival and combat skills (and preparations for more mundane disasters) would be the majority of the survivors. Of course, a cast of such people would lack the character diversity needed to pull in an audience.

Fourth, for some weird reason, the military seems to more or less vanish (Day of the Dead being something of an exception). While AMC did make a point to show tanks, helicopters, trucks and military fire bases in the show, they are always abandoned. Given that zombies are mindless, unarmed dead humans who attack by biting, they should be unable to take out armored units. Tanks, APCs, and even light military vehicles should be able to roll right over them and shoot them to pieces. Also, tanks are rather fast-they could roll through zombies and zip away to refuel and resupply.  As an example, think about the firepower at Fort Knox and consider whether zombies could take that. Of course, having folks rolling hard over the zombies and shooting them to pieces with .50 caliber machine guns would not make for a suitable zombie show-although it would make a kick ass scene.

On a related note, there is the obvious question about the ships at sea. Surely most of the fleet would be uninfected by zombie bites and they would be able to provide support to land operations. Then again, maybe they all just sail to some island and settle down. Of course, watching some folks on a ship  (or island) would probably make for a boring zombie flick. But, there should be at least some vague attempt to explain this factor.

Fifth, zombies are slow and stupid and there is plenty of ammo. Just imagine a few folks taking a secure position with boxes of ammo, scoped hunting rifles and food and water. A good shot should be able to kill a zombie with one bullet and gun stores are well stocked with ammunition. Heck, I know some folks who have hundred of rounds on hand now as well as reloading supplies and survival rations for a month. I can easily picture them up on top of a building sniping zombies.  Of course, that would be a bit too easy for a zombie flick, so folks generally do not think to do this-or they decide to shoot from someplace that is zombie-accessible. Perhaps there is a Zombie Law comparable to the Disability Law: you must always include accessibility for the living and undead.