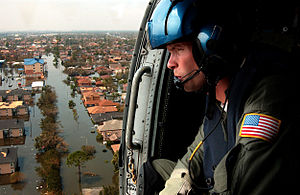 While a person’s political view tends to serve as a tinted lens in such matters, where the money goes is a matter of fact. While it can be rather challenging to determine where it goes, it is often possible to discern just where it is ending up (or not ending up-such as the billions of dollars unaccounted for in Iraq).

As a specific example, consider the situation in Louisiana. After Katrina took down New Orleans, the federal government provided billions of dollars to the region. But, one might wonder, who received the money? Of the $5.9 billion in bonds in Louisiana, New Orleans received less that 1%.  $2 billion went to support oil production projects, such as $1 billion to expand a refinery.  Meanwhile, parts of New Orleans are still uninhabitable.

While I do agree that creating jobs is a good idea, it might be wondered why the state would need to provide two billion to the oil industry. After all, oil companies seem to operate with rather tidy profits and hence seem to be far less in need of tax payer support than people who lost everything to Katrina. It would seem to be both more sensible and ethical to aid those who are most in need of help first. Once these people are given the support needed to rebuild their lives, then perhaps the well off corporations can be given the leftover money.

Given the changing climate conditions and our general lack of proper defensive preparations against natural disasters, it seems reasonable to expect that new disasters are just around the corner. Given the way Katrina was handled, it seems reasonable to expect the same pattern to repeat itself again. That is, most of the money that is supposed to aid those in need will instead end up going to companies.