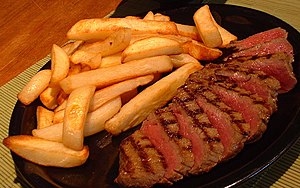 A few days ago I saw a segment on CNN about how some hospitals overcharge patients. For example, a hospital might charge over $100 for a single Tylenol or charge a patient four times the price of a surgical instrument. What struck me as most interesting in the segment was that an administrator defended the practice with an analogy.

At first glance, the analogy seems reasonable. After all, when you go to a restaurant you pay more because you are getting more. To be specific, they prepare and serve the steak. Likewise, the hospital does not just sell you a pill or instrument-they use it as part of a treatment process. Just as it makes sense to pay for the preparation of the steak, it makes sense to pay more for the service the hospital provides.

However, a closer examination shows that the analogy breaks. When you buy a steak at a restaurant, the price of the steak includes the preparation, service and the setting (that is you are sort of renting a table by buying a meal). As such, the meal is more expensive than an uncooked steak you buy at the market because you are actually getting more than just an uncooked steak. While the restaurant breaks the bill down to include what you order, they do not break down the costs into ingredients, preparation and so on.

In the case of the hospital, the patient is charged “item by item.” To be specific, the hospital bill lists the charge for each service, each instrument, each unit of medicine and so on. So, when a patient is charged four times the cost of an instrument or $100 for a Tylenol that charge does not include the services. It just includes the cost of the item in question. For the analogy to the steak dinner to work, restaurants would have to bill customers for each ingredient at a very steep markup and then tag on charges for all the services and so on that the restaurant provided. For example, a steak that would sell for $15 at the supermarket might cost $60. Naturally, the customer would also be charged for the cooking, the electricity used, the arrangement of the food on the plate, the silverware cleaning, and so on. In this case, the price charged for the steak itself would be unfair. After all, the customer is paying four times the cost of the steak itself and merely getting the steak for that price. Everything else is extra. Likewise for the medical markup.

While it is fair to pay for the services that the hospital provides in addition to the cost of the medicine and such used in the treatment, it is unfair to have to pay for a huge markup on such things. After all, the patient is not getting anything in return for the excessive charge.

The analogy also breaks down in other ways. For example, eating at a nice steak restaurant is a luxury while medical service is often a necessity. Charging excessively for necessities is different from charging a lot for luxuries. As another example, people can easily prepare a steak at home to save money, so going to a restaurant is a matter of choice. In most cases, people cannot provide medical treatment at home (for example, home surgery is not really an option).  To charge people excessively because they have no real alternative is quite different from charging people much more for a nice steak. As such, the comparison to a steak dinner at a restaurant fails in significant ways.

Of course, the folks who defend such charges also have another argument: hospitals need to make money to stay in business. If they did not make enough money, the hospital would not be there the next time someone needed it.

This does, of course, justify hospitals charging for their goods and services. After all, they need money to buy equipment and supplies and to pay employees. However, this argument does not justify charging excessive amounts of money for supplies and medicines. A steak analogy can be used here.

Suppose you go to a restaurant and get charged $500 for your steak dinner. You complain and ask why it costs so much. The manager says that $60 of it was for the cost of the steak and the remainder is for various services, ingredients and expenses. When you point out that they paid $15 for the steak, the manager says that if you did not pay the markup, there would be no restaurant here the next time you were hungry. Obviously, you would not be convinced that the bill was justified. The restaurant could easily stay in business and make a profit by charging much less. Presumably the same is true of hospitals.

Of course, it might be replied that a hospital needs to charge so excessively to stay in business. However, this does not work as a reply. Suppose, for example, that a forceps costs the hospital $200 (including shipping, processing and so on) and they charge the patient $800 for it.  Of course, they also charge for everything else as well, so the $800 is just for the $200 forceps. In terms of staying in business, a $200 charge for the forceps would be enough since the patient also pays for everything else as well. If, however, the patient is being charged $800 for the forceps to pay for other goods and services, then the hospital should simply put those costs on the bill. After all, they are quite adept at listing everything else, right down to the last Tylenol.  As such, charging such excessive fees is not justified by the “staying in business” argument.

It could also be replied that the hospital needs to make a profit. After all, the business of business is not to treat patients or provide affordable care, it is to make a profit. Obviously, the key to profit is to charge the customer for more than he is actually getting. After all, if the fee charged merely equals the cost of the materials, services, administration, and so on, then there would be no profit. While there are some excellent arguments that profit is thus by its very nature unjust, let it be assumed that people have a right to profit. Of course, the question then arises as to the just limits of profit. In the case of medical bills, they often seem to exceed these just limits. After all, unlike steak dinners, medical treatment is often not an optional luxury, but a necessity.