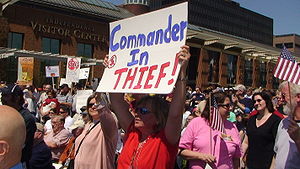 The charges of racism against the Tea Party are getting considerable media attention, perhaps because people have become bored with the oil spill and Lebron James has made his decision.

When assessing whether the Tea Party is racist or not, one has to consider the nature of the charge. One possibility is that the movement has racist principles. This does not seem to be the case. Rather, the main concerns seem to be with economics and politics. This is no doubt why the NAACP did not make a resolution against the Tea Party’s general political ideology.

Another possibility is that the movement contains racists and makes use of racism as a tool. To be specific, racist images, stereotypes and prejudices are used by Tea Party leaders and members to gain support and to attack the Obama administration. As noted in the previous post, some of the images used by and comments made by Tea Party members could be taken as racist. However, to justly accuse a group of racism it would have to be shown that such behavior is encourage or at least tolerated.

In general, the Tea Party leadership has taken pains to insist that they are opposed to racism and do not tolerate it. They point to minority members and leaders as evidence and also make public statements against racism and racist behavior.

In reply, people sometimes point out that the Tea Party is mostly white. However, if having membership that is mostly one color makes a group racist, then the NAACP would be racist. As such, this sort of reply is problematic. In any case, the fact that most members of a group are one race does not, by itself, indicate racism is at work.

As another reply, people point out that the Tea Party is very critical of Obama. However, being critical of a politician is not racism. That seems merely to be business as usual in American politics. What would be needed to prove racism is to show that the attacks and criticism of Obama are not based on political differences but are instead based on race. So, if the Tea Party were attacking Obama because he is black, then that would be racist. However, if they attack him because they think he is spending too much or not doing enough about the economy, then that is a politically based dispute and does not seem to be racist. To assume that any criticism of Obama must be based on race would itself seem to be racist. It also does Obama a disservice by making his race primary and not his political views.

While there do seem to be racists in the Tea Party, this is nothing unique to them. The Republicans and Democrats have their own racists, but this does not justify a sweeping condemnation of either party. The Tea Party should be afforded the same courtesy and not judged primarily by its fringe members.

That said, there are some legitimate concerns that there is an undercurrent of racism in the movement. However, some of the Tea Party leaders seem intent to damn that current. In any case, the Tea Party movement should be judged on the facts and care should be taken to avoid letting emotions and rhetoric cloud the judgment.