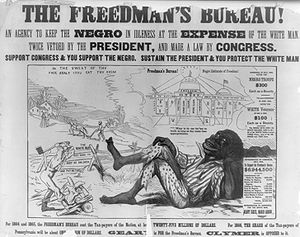 The NAACP recently passed a resolution condemning what they perceive as racism in the Tea Party movement. The resolution does not, to be clear, condemn the political views of the Tea Party. Rather, the resolution is in response to alleged racist behavior on part of certain individuals at tea party events. As evidence of such racism, people point to the comparisons made between Obama and monkeys, as well as the infamous Obama witch doctor and Joker images. Oddly enough, a segment on CNN presented as evidence of racism a Tea Party image comparing Obama to Hitler and Stalin.

The monkey comparison does seem to be racist, although George Bush was also compared unfavorably to monkeys. It does, however, seem reasonable enough to take such comparisons as potentially racist, given the long history of such comparisons in racist contexts.

The witch doctor comparison could also be seen as racist. After all, it does cash in on a racial stereotype. Of course, the notion of comparing someone to a witchdoctor does transcend race. However, it does seems reasonable to take this image as racist.

The Joker image does not seem racist. While some folks have made a point of it being Obama in “white face”, the point of the comparison is to cast Obama as some sort of crazy super villain.  The Joker, thanks to years of comics and the Batman movie, is an easily recognized symbol of evil. While this is hyperbole, claiming that it is racist is grasping at straws. The burden of proof in this case seems to rest on those who see racism in a comparison to a super villain.

In the case of the Stalin and Hitler comparisons, they seem to be devoid of racism. No racial stereotypes are being used, nor does the comparison seem to have anything to do with Obama being black. Rather, the folks who make the comparison are doing so based on what they see as Obama’s socialist policies. On the face of it, calling someone a socialist, communist or Nazi is not racism. It does seem to be hyperbole in this case, but hyperbole is hardly the same as racism.

Of course, the above does not show that there are not racists who attend the Tea Party events. People do appear at such events and do express racist views. However, it might be wondered whether the Tea Party leadership has an obligation or even the right to silence such people.

On the one hand, it can be argued that the Tea Party should take a moral stand against such views and that it has an obligation to police its events in regards to racist expressions.

On the other hand, it can be argued that the right to free expression entails that the Tea Party leadership does not have the right to silence such people at public events.