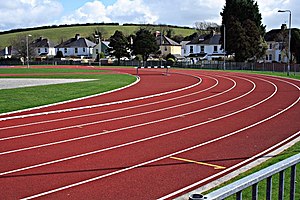 Got them track blues…

zombies on the track, they wander but don’t attack…

fools playing chicken, their brains they need to quicken…

no place to pee, water fountains I can’t reach but can only see….

Got them track blues, baby.

While I love to run, I generally do not like running on tracks. While they are easy on the legs, running around and around can be a bit dull. Plus, they tend to be wicked hot in the summer. But, what makes tracks the most annoying is what people do.

The most annoying people on the track are those I call the  Chicken Players. These are the folks who seem intent to play chicken with people who are running. For example, I was doing mile repeats on a high school track and some ROTC or army folks showed up to do some PT test. I have nothing against army folk, especially since I have friends who are in the military. However, the person in charge made a point of stepping out into the first lane every time I came around the track. He would look at me, so I knew that he was well aware I was doing speed work. Just to be clear, neither he nor his soldiers were using the track (aside from stepping out onto it).  As such, there was no legitimate reason for him to do that repeatedly.

Perhaps the second most annoying people are what I call the Lane One Zombies. By track law and tradition, the inner lanes are for people who are actually running. The outer lanes are for walking and jogging. Despite the fact that many tracks have these rules clearly posted, there always seem to be folks who simply must simply stand in the first lane. Or stretch there. Or wander into the lane while I’m doing speed work. Since they seem oblivious and zombie-like, I call them Lane One Zombies. I’m not mean about it though.

A third annoying thing is that people lock up the bathrooms and even lock the water fountains behind fences. I can understand why track facilities are locked up at night, but it is painful to gaze at water fountains through a chain link fence while I am sweating and hot. While I do bring water with me, it does tend to get rather hot quickly in the summer (I generally run to tracks).

Speaking of hot water, I’ve noticed that track water fountains tend to be cruelly deceptive-they often look like the fountains that produce ice cold water, but turn out to just produce water warm enough for noon tea.  Interestingly, the facilities for more prestigious sports tend to have nice, cold water fountains. I assume that this is because runners are deemed to be unworthy of cool water.

The least annoying of the annoyances is when people are doing things on the track that are not really track related. These typically involve people from other sports doing some sort of leaping or hopping exercises on the track that could (and should) be done on their own field. Of course, I am just grumpy about this because runners often get run off other sports’ fields-even when those fields are not in use.

“Get off my track, you damn kids!”