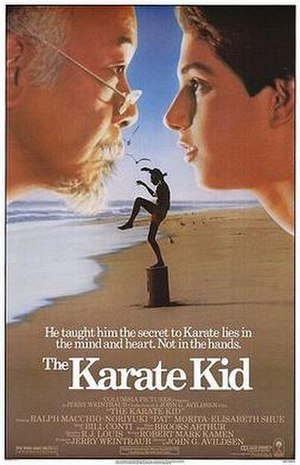 Hollywood has an established history for remaking movies, despite the fact that these remakes usually turn out badly. However, the do seem to make enough money so that Hollywood folks keep cranking them out.

One of the most recent remakes is the Karate Kid. As some critics have pointed out, the kid is not learning karate but rather kung fu. It is not entirely clear why a movie with “karate” in the title would actually be about kung fu, but perhaps the folks in Hollywood are unaware of the distinction between the two. Of course, they could have made a movie called the Kung Fu Kid but presumably they are hoping to cash in on the nostalgia for the original movie by using the same name.

In some cases a remake might make sense. One legitimate reason might be to take advantage of advances in special effects, provided that these advances would improve on the original. A second legitimate reason could be to remake a film whose setting is dated yet is worth remaking in a contemporary context. The works of Shakespeare are often set in different times with great (or modest) success. The same could be true of some movies. Perhaps the Karate Kid is such a movie. If so, that is good.

Of course, the two main reasons that movies are remade tend to be 1) Hollywood is out of new ideas and 2) a desire to make money. A film that worked once can be expected to have a chance of working again (although, ironically, remakes often are worse than the originals). More importantly, people tend to not be inclined to pay to see an old movie re-released in the theaters. However, people are more inclined to pay to see a remake.

I did see the original Karate Kid and thought it was okay. I never wanted to see it again, so I won’t see the remake.

Another remake (or sorts) is the film version of Avatar, the Last Airbender. This was originally a three season animated series on Nickelodeon. While it was aimed primarily at kids, it actually had well-developed characters, an interesting mythology, an original setting, and a well-written storyline. I recently re-watched the series on Netflix and rather enjoyed it.

I suspect the Avatar movie might be rather bad. First, the story has already been told over three seasons. Usually a movie that tries to condense a long story into a single film tends to end up a poor work. Second, the director has had a track record of rather weak films lately. While he did some good films, he has really been in a slump lately. Perhaps he got his game back for this film, but perhaps not. Third, transforming an animated series into live action generally does not go well. Fourth, the commercials seemed a bit…cheesy. While I try to avoid judging a film on the commercial, what I saw made me think of various bad fantasy films I’ve seen over the years. Finally, the studio decided to add 3D to the film. While this does not entail that it will be bad, it does seem to be a bad sign (think about the Clash of the Titans remake…)

In any case, I do not see a compelling reason to make the Avatar movie. As noted above, the series ran through its story and came to an end. The movie looks like it is simply retelling the same story-a story that has already been told very well. Making it into a live action film also does not seem very compelling either. However, I intend to withhold my final judgment until the film is actually released. Perhaps it will be awesome.