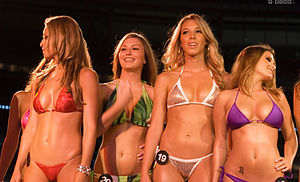 Dahlia Lithwick wrote an interesting essay in the June 14th issue of Newsweek about the law and beauty bias. This got me thinking about the issues she raised.

Currently, there is little legal protection against discrimination based on appearance. Of course, there is the obvious question of whether there should be such protection.

On one hand, it could argued that there is no need for such laws. First, such laws could be seen as intuitively absurd. A law against not liking ugly people? How absurd!  Of course, this might simply be an appeal to ridicule: the mere fact that something can be laughed at or seems silly is hardly prove that it is.

Second, there is the reasonable concern that such laws would set a legal precedent for even more laws that would lead to either real legal harms or at least to a degree of absurdity that would be undesirable. For example, what if laws were passed to prevent “discrimination” against people for being foolish. Of course, this could be seen as a slippery slope argument. Unless, of course, reasons can be given showing that these negative results would follow.

Third, there is also the reasonable concern that people are naturally biased in favor of attractive people and also biased against people they regard as unattractive.  This can be seen as being analogous to the fact that people tend to be biased in favor of people who are pleasant, friendly or entertaining while they tend to biased against people who are unpleasant, unfriendly or boring.  It would seem absurd to pass laws that attempt to compensate for the bias people have in favor of such people. If the analogy holds between looks and personality, then it would seem absurd to pass laws against discriminating based on appearance.

Despite these points, there is a rather significant reason to favor such a law. This reason has nothing to do with unattractiveness but rather to do with the notion of relevance. From a moral standpoint, to fire or otherwise mistreat a person in a professional context (for the law to cover personal relationships would be rather absurd) based on appearance would seem to be unacceptable. To use a specific example, if a Hooters Girl is doing her job as a waitress to fire her because she weighs “too much” would be unjust. After all, as long as she is physically able to perform her job, then her weight would not be relevant.

One possible reply to this is that there are certain jobs in which attractiveness would be a relevant factor. To use an obvious example, super models are supposed to be beautiful and it would be rather odd for someone of average or less appearance to argue that they are a victim of discrimination if they were not chosen to be a supermodel. To use an analogy, if a job required a great deal of physical strength or a high degree of intelligence or creativity it would hardly be discrimination if people who lacked those attributes were not hired for such jobs.

That, it might be said, can be seen as a crucial part of the matter. If appearance is a legitimate asset and actually part of certain jobs, then to hire (or not hire) people based on appearance would not be discriminatory in these cases.

Of course, there is the concern  that there should not be jobs that are based on physical appearance. Such jobs, it might be argued, are inherently discriminatory and also serve to create various problems. Feminists, for example, often present such arguments. However, it could also be argued that there should not be jobs based on other natural assets such as wit, humor, intelligence or creativity. After all, if valuing beauty is somehow wrong, then it would seem that valuing these other qualities would also be wrong.