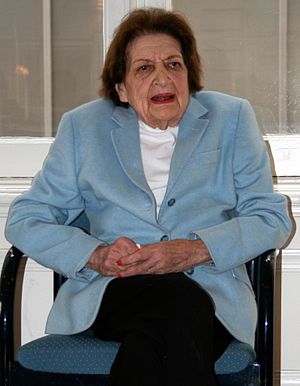 While it took Helen Thomas decades to build her reputation and status, it took her mere seconds to mortally wound her career.  While I will not side with or against her in this matter, it is worthwhile to examine her remarks and the criticisms presented against them.

Thomas was asked  if she had any comments on Israel. Her response was “tell them to get the hell out of Palestine.” When asked for a better comment, she said, “remember, these people are occupied and it’s their land. It’s not German’s. It’s not Poland’s.” When asked about where she thought the Jews should go, she made it clear that “they should go home”  and that she regarded their home as  “Poland, Germany … and America and everywhere else.”

These remarks led her to be accused of being an “anti-semitic bigot” as well as being ignorant of history.

In terms of the first charge, the main basis for this is an argument by analogy.  For example, Ari Fleischer claimed that  “If this isn’t bigotry, what is? What she said is as bad as someone saying all blacks should leave America and go back to Africa.”

One weak point is that the history behind the two compared situations is a bit different. The ancestors of many black Americans were forcibly brought to America.  In any case, the blacks who came to America generally did not willing chose to take an active role in the displacement of the native population. Nor did the blacks who came to America use military force to occupy land for the  (alleged) protection of a black nation in America. As such, there does seem to be some relevant differences between the two situations. After all, someone could argue that the Israelis who are not descended from the original inhabitants and who are occupying territory that belongs to descendents of other original inhabitants should go back to the lands of their ancestors. If so, a better comparison would, perhaps, be to someone who said that white people should leave America and go home to Europe and the land should be restored to the natives.

Of course, these differences might not be enough to actually break the analogy. After all, it could be argued that what matters is that a group of people were told they should “go home” based on a specific identity and perhaps that is enough to establish a claim of bigotry.

In terms of the second charge, it might be wondered if her remarks show that she is ignorant of history. On one hand, she is correct that many of the people who went to found the modern state of Israel came from other parts of the world including Poland, Germany, and America. As such, that aspect of the claim is accurate. On the other hand, her claim can be challenged. First, it could be easily argued that the Israelis are home. Using her own claim about America being a home, it would seem to follow that Israel is also a home. After all, America is composed of people from around the world and clearly acquired much territory via conquest. As such, if Americans are home in America, Israelis are at home in Israel.  Second, it can be argued that modern Israel has a link to the past that makes Israel the historical and legitimate home of the modern Israelis.

Of course, both these replies can be countered. After all, it can be argued that conquest does not make a land into a home and, of course, the notion that modern Israel has such a justifying link to the past can be debated. This does raise the rather large ethical question of what justifies a claim that a land is the home of a group. Is it history? Conquest? Purchase? Long occupation? Being the first there? Or something else (or nothing at all?). Unfortunately, while I have time to raise these questions, hashing them out would go way beyond the scope of this blog.

However, it would seem that the Israelis are legitimately at home-at least as legitimately as the people of many other countries. Which might not be very legitimate at all.

My own view is that Thomas’ remarks were (to say the least) rather unfortunate. However, I am not sure that they prove conclusively that she is a bigot or ignorant.  After all, I have learned not to judge a person’s character by a few words but to look at the overall patterns of behavior and expressed belief.  Thomas does not seem to have a record of bigotry or ignorance, so perhaps it is unfair to judge her harshly on this one incident. Or perhaps not-perhaps it is fair and just to judge a person on the basis of a single incident such as this.