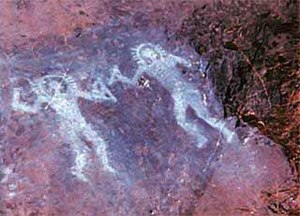 When people learn that I am a philosopher they sometimes ask me if I believe in various odd things, such as ancient astronauts.

While I do admit that I do have an interest in the idea, this is not primarily due to my being a philosopher. Rather, it is based mostly on my love for science fiction. That said, it seems worthwhile to look at the subject with a philosophical eye.

In terms of evidence for ancient astronauts and similar high-tech ancients, people point to various stories about what seem to be amazing technology, strange ancient illustrations that seem to be of high tech stuff, and even what seem to be models of aircraft and ancient runways.

Of course, each of these categories can easily be countered. In the case of the stories, they can be accounted for as being just that-stories. After all, people write science fiction and fantasy stories today. If, a few thousand year hence, people read through our fiction and inferred that all that was described (such as warp drives) existed, then they would be clearly in error.

In regards to the strange illustrations, they can be interpreted as being of high technology (such as spaceships or aircraft). However, they can also be explained in a different way. While some do resemble technology, this can be simply a matter of people today seeing what simply seems to be there, but is not. The main problem is, of course, that none of the illustrations are clearly and unequivocally images of high technology. As such, their value as evidence is rather limited.

In regards to the models of aircraft, these can be explained without reference to there being ancient aircraft. One possibility is that they are models of birds or other flying creatures. Another possibility is that they are not models of aircraft that really existed, but perhaps speculative models. After all, thinkers like Leonardo envisioned machines far ahead of their times and long before they existed for real.

In regards to the alleged runways and other markings that are best seen from the air, these need not be evidence for ancient flying machines. After all, it is easy enough to envision what something would look like from above: simply draw it on paper or the ground, then look down on it. Such a drawing can then be recreated on a large scale-just as architectural plans can be transformed from small paper drawings into giant buildings.

However, it is possible that the ancients did have some impressive technology.  One excellent example is the Antikythera mechanism-an ancient computer that seems have been designed to determine various celestial events. Given this sort of technology, it is not inconceivable that ancient humans built flying machines of some type.

Of course, the obvious problem is that despite all the alleged evidence, no one has found an solid evidence of such machines. That is, no engines, no wings, nor any other piece of technology. Without such solid evidence, the belief in such ancient flying (or space) technology is built on a very weak foundation.

Of course, the ancient machines could have rusted away or otherwise have been lost due to the years and the ravages of nature. While this is possible and would explain the absence of such evidence, the better explanation would seem to be that such machines never existed.