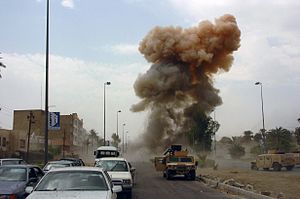 When car bombs go of in Iraq, it gets rather limited coverage in the American news media (perhaps a quick news blurb or a sentence in the news ticker). In contrast, a failed attempt at a SUV bomb in New York has been dominating the news and generating a media frenzy.

No doubt some people will point to this incident as evidence of the dire danger we face from terrorist. There will most likely be calls for new laws and new procedures to “prevent this from happening again.” However, what strikes me most about this incident is not that it is evidence of the dire danger we face but rather a sign that we are actually fairly safe from terrorism.

It might seem odd for me to make this claim. After all, someone tried to blow up a plane with a bomb in his underwear and now someone tried to set off some sort of jury rigged bomb in New York. Surely, it might be claimed, we should be very afraid.

While we should be concerned that there are people who are trying to blow us up (now mostly in inept ways), these incidents need to be put in perspective. First, the competence level of the recent attacks has been extremely low. This indicates that the professional terrorists are operating elsewhere and this puts us in less danger. Second, the odds of being hurt in a terrorist attack in the US are extremely low. For example, the odds of you being run over by a drunk driving an SUV are much higher than the chances of being killed by an SUV loaded with explosives by a terrorist. As another example, an American is vastly more likely to die from eating too much salt than  by being blown up by a terrorist. As a final example, you have a better chance of being killed by another American committing a “normal” crime than you have of being killed by terrorists.

This is not to say that we should not be on guard against terrorists. However, our guard and our worry should be proportionate to the threat.  Unfortunately, people are generally not very good at threat assessment and, of course, politicians and the media folks tend to really screw with doing a proper assessment of risk. In my own case, I worry more that some FSU student will hit me on a run with her SUV while texting about her latest drinking binge than I worry about being blown up by terrorists. True, some terrorist group could be plotting the ultimate attack on America that will kill us all. Perhaps they have intentionally decided to only allow a tiny number of  incompetent attacks to lull us into a false sense of security. This is, I admit, possible. However, it seems rather unlikely. If they hate us as much as the pundits claim and if they had the means and desire, they should be hitting us on a regular basis here in America. As such, we should be keeping an eye out for people who are up to no good but we should not lose any sleep over it. After all, if we can sleep soundly knowing that  40,000 people are killed each year in automobile accidents, then we should not lose any sleep over an SUV that did not kill anyone.