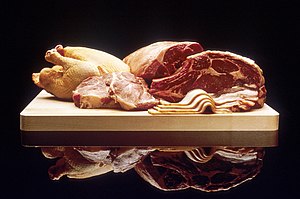 When the issue of the ethics of eating meat comes up, people often regard the matter as being primarily of academic concern. Or, far worse, a matter than only really matters to those who hug (and perhaps eat) trees. However, the ethics of meat does matter on a much broader scale.

Since the subject is rather substantial, I have decided to devote a short series of blog posts on this matter. I’ll begin with making the case as to why meat matters. I will, of course, endeavor to do so without begging any questions for or against meat.

One obvious way to motivate the concern is to point out that what we do to animals would be regarded as rather evil if it were done to human beings. A little dialogue should illustrate this point nicely.

Bill: “Hi Sally. Wow, that sandwich you’re eating smells great! And are those new shoes and a new leather jacket?”

Sally: “One of my neighbors. They crossed me for the last time, so I had to kill them. I didn’t want the meat to go to waste, so I barbecued them using my mother’s secret BBQ sauce. Of course, the secret is she buys it at the supermarket.”

Sally: “No, really. I just bought the sauce right off the shelf.”

Bill: “Not that…I can’t believe that you are eating human meat!”

Sally: “Well, you did, too. Plus, you eat meat all the time. Hmm, I probably shouldn’t tell you that I made my coat and shoes out of their skins. Waste not, want not…as my mom used to say.”

Sally: “Oh, you silly goose. Of course I didn’t skin and cook my neighbors! This is just a pulled pork sandwich and the boots and shoes are cow leather!”

On the face of it, things that are wicked and evil to do to humans should also be wicked and evil to do to animals. As such, we should not just assume that eating animals is okay-anymore than we should assume that killing and eating humans is okay. There might be relevant differences between humans and animals that justify the difference in treatment, but this is something that must be argued rather than merely assumed. At the very least, the possibility that we are doing great evil is something that should give us pause-if only between bites.

A second reason that shows why meat matters is based in religion. Interestingly enough, Christian thinkers such as St. Augustine and St. Aquinas took the issue of killing animals very seriously. After all, killing is supposed to be a sin and animals can obviously be killed. While, as we will see, Augustine and Aquinas concluded that eating meat was both theologically and morally acceptable, they did show that it is an issue well worth considering. There are, of course, religions that take a rather strict theological and ethical position about meat and killing animals. As such, this makes the matter worth considering. Naturally enough, religion and ethics are distinct, but it is possible to make inferences from the one normative domain to the other (provided that the proper steps are taken).

A third reason is based in practical concerns. The raising of meat for food is rather resource intensive and it generally takes several pounds of feed/grain to produce a pound of meat. Given the limited resources of our planet, this does raise both a practical and a related moral concern about eating meat (or at least certain types of meat). Another practical concern is the matter of health. While there is some debate about the details, it is well established that meat intensive diets are less healthy when compared to diets that are less meat intensive. Since how we treat our bodies can be taken as a moral concern, this also provides moral grounds as to why meat matters.

In this post I have just sketched out some reasons why the issue matters. In my next post on the subject I will start examining the morality of meat.