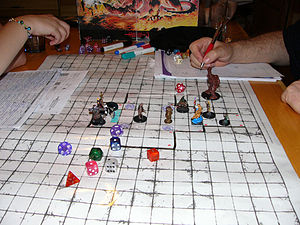 In a rather odd story, a prisoner in Wisconsin has lost his appeal to keep his D&D material (that is Dungeons & Dragons).

This is the result of an anonymous letter sent in 2004 alleging that the prisoner, Singer, was forming a gang around the D&D game. Of course, anyone familiar with D&D will know that while D&D players seem a bit gang like (strange lingo, obsession with loot, and so on) they are rather far from the sort of gangs that people need to worry about.

The first part of the charge is obviously true. D&D is all about fantasy role playing. Saying that it promotes this is like saying that track promotes running.

The other claims are far more debatable. They are also, as Socrates might say, the old charges that have been trotted out against gaming for decades-despite the complete lack of adequate evidence for such claims. My own experience has been that while gaming does tend to attract people with a desire to escape reality, gamers seem to be no more prone to violence or gambling than non-gamers. These matters are, of course, subject to empirical testing but the burden of proof rests on those who claim that gaming has these effects.

As I see it, it would actually be a good thing to have prisoners playing D&D.  After all, time spent playing D&D would be time in which they are not doing things like using drugs, raping each other, engaging in real violence, or engaging in other activities that create real harms.

D&D also tends to encourage reading, an interest in numbers, as well as the development of the imagination. It can also help people develop social and cooperative skills. True, players can elect to be evil and do evil things to one another, but that usually teaches the lesson that being evil does not work very well.

A more reasonable justification for not allowing prisoners to play D&D is that prison is supposed to be punishment. Therefore, the officials argued, prisoners should be denied what they enjoy.  This, of course, assumes that keeping prisoners bored is a form of punishment and that this has desirable consequences.