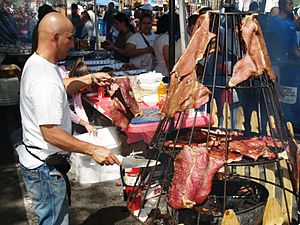 I recently ran across an article in Newsweek entitled “Vegetarians Who Eat Meat”, which got me thinking about two issues. The first is whether a person can be a vegetarian and also eat meat. The second is whether the way the meat animal is raised impacts the morality of eating it.

Vegetarian: (loudly) “Does this have meat in it? I’m a vegetarian, so I want to avoid eating any meat.”

Me: “Yes, that ham salad has ham in it. That’s meat, you know. But, I’ve seen you eat meat recently-like that cheeseburger you had the other day.”

Vegetarian: “Well, I do have a little meat now and then. But I’m still a vegetarian.”

Me: “Ah. I know some people who practice abstinence that way: they only have a little sex now and then.”

Also, there are many variations on the vegetarian theme, so a person could (with a suitable category choice) be a vegetarian and still consume meat. This, of course, does lead to some questions about what it means to be a vegetarian if people can claim that title despite consuming meat. But, as I see it, as long a they are not too self-righteous about it there is no harm in letting them enjoy their self applied title.

I’ll address the second issue in my next blog post.