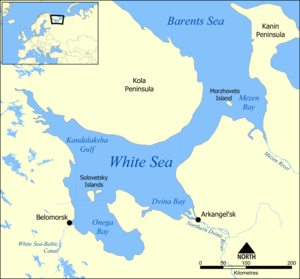 Back in Stalin’s day, the White Sea Canal was constructed. This canal was created ahead of schedule and lauded as a great achievement for the Soviet Union.

On the downside, the canal was built by forced labor and was a true engineering disaster. Among the problems was the fact that the canal was too shallow for the ships that were supposed to travel it.

While the canal is presented as an engineering disaster, it also serves as a monument for the political mind and its ability to ignore reality (or at least pretend to do so). As noted above, the failed canal was presented as a great triumph and treated as such, even in the face of clear and obvious empirical evidence to the contrary.

While the White Sea canal is an extreme example, the same sort of phenomenon can be observed on a smaller scale across the ideological spectrum. When the success of a project is tied into the ideology, it is often simply seen as a success whether it is or not. The same sort of effect can also happen in reverse. That is, something that is a success can be regarded as failing (or being a worse failure than it is) based on ideology. While what counts as success can be relative to ideology, there also are some objective standards. For example, a canal that cannot handle the ships that are supposed to travel it is a failure.

This phenomenon is a matter of significant concern. After all, if people tend to judge success or failure based on ideology, then they will not be capable of making objective assessments of plans and projects. This will, obviously enough, lead to poor decision making.