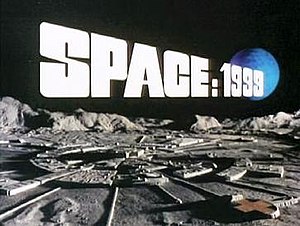 When I was a kid, I watched Space 1999 and thought it was rather cool. Recently I watched some episodes of the Outer Limits on Hulu and that got me thinking about old shows, including Space 1999. I went on Amazon to see if they had the series and was pleased to see the complete set being sold for under $40. I hesitated a bit before buying it. After all, I have learned that my memories of TV shows past has sometimes been far better than the shows themselves. But, I figured that for $40 I could take that risk.

I’ve been through two disks already and must say that the experience was better than I had expected. The sets, effects and props were quite good for the time and the acting was competent.

The weak point of the series was, ironically enough, also the strong point: science. The show explored various interesting ideas such as black suns (black holes), the relativity of time, alien life, multiple existences in time, immortality through science, and so on. This helped make the show quite interesting. On the downside, the show contained  serious scientific errors. The most obvious error, and one integral to the plot, was that the moon was blasted from earth’s orbit by an explosion and this somehow was able to propel it far beyond the solar system and into a series of adventures. This error was, of course, pointed out by Issac Asimov. Upon reflection, it seems a bit odd that the series creator decided to go with a wandering moonbase rather than using the more plausible idea of a wandering space ship. Then again, the idea of the moon wandering about is certainly an interesting approach and, of course, the series creators probably were worried about duplicating Star Trek.

If the series is ever re-envisioned (perhaps by the folks at the SyFy channel) they should (obviously) keep the moonbase aspect. However, they should come up with a better explanation for the moon’s wandering. Perhaps an experimental drive that becomes damaged and irradiated so badly that the Alphans cannot control or repair it. Or perhaps the old standby of alien technology that is discovered buried in the moon and accidentally activated (sort of a 2001 and Stargate approach). In any case, I think that the series would do well if it were redone properly.

One last thing that really struck me about the series was the realistic sets and props they used. For example, the Eagles looked (and still look) awesome. While it is hard to imagine them flying well in an atmosphere, they seem to be fairly well designed for short space flight and the modular design is certainly both practical and useful. The designers even included directional thrusters on them-a nice touch. As another example, the comlock device nicely anticipates the smartphone in many ways-it served as a communication device as well as an electronic key chain.

While Space 1999 lacks the broad appeal of Star Trek and is inferior to that series, it does have a certain magic of its own. Some of the episodes are quite good and the series is still worth watching-if only for a return down memory lane for folks like me. Of course, if you never saw it when it was on TV and you like sci-fi, then it is well worth giving it a watch.

My favorite episode is, by the way, Dragon’s Domain. This was the first horror/sci-fi I ever watched and it has stuck with me through the years.