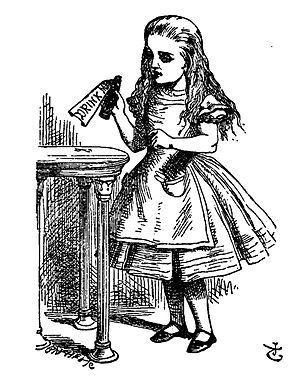 Like most philosophers, I rather like the works of Lewis Carroll. After all, threaded into the fantastic settings and events of the tales are clever word plays, logical puzzles and philosophical matters. When I heard that the SyFy channel (“SyFy”…oh my that is absurd) was remaking Alice I had some hope that it would be cool and clever.

I watched it and found it somewhat interesting. However, it was something of a disappointment. While I did not expect the show to stick faithfully to the works of Carroll, I expected that a serious attempt would be made to capture the spirit and logical wit of Alice’s adventures. Instead, we are given a dystopian world, a tired plot, and some rather lame lines.

The only things from Carroll’s works are the characters’ names and some very basic plot elements. While Dum and Dee make a reference to logic, the wit and word play that made Alice’s adventures so special are simply missing. Perhaps it was believed that today’s audiences simply would not get or appreciate such cleverness, wit and logical puzzles. It might be contended that people like Alice’s adventures despite rather than because of these elements. That is, they like the strange characters and odd adventures and are willing to overlook the logic.

While that has some truth to it, I think that such a view does  a disservice to Carroll’s readers and I think people do enjoy the wit and even the puzzles. But, being a philosopher, perhaps I am biased.

Naturally, if a show is going to be presented as being meaningful associated with the Alice stories, then it would seem that it should have a more substantial connection and also do more to match the spirit of the original works. True, it did have a degree of oddness as well as strange drinkable substances.

In many ways, Alice is a repeat of the Tin Man show. After all, Alice is in a dystopian world ruled by an evil queen who needs an item in order to do her evil stuff. There is even the missing father element. Also, the companion characters are in the Tin Man theme: the White Night is the Cowardly Lion and the father has lost his heart.

Interestingly, this is not the first dystopian Wonderland. American McGee‘s computer game Alice did a rather interesting job of twisting the Alice story and transforming the story into a game based on the Quake III engine. A movie based on the game has been in the works for some time. When I first heard the SyFy channel was doing Alice, I thought that it might be this version.

However, the show was not as bad as it could have been and was entertaining enough to motivate me to watch the whole thing