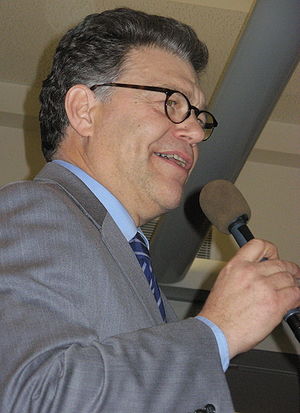 Al Franken, now a senator, introduced his first piece of legislation. His proposed amendment was inspired by the plight of Jamie Leigh Jones.

The details of the Halliburton incident are rather terrible. Not only was Jones gang raped by fellow Halliburton employees, she was locked in a shipping container and apparently threatened with termination of her employment if she left Iraq for medical treatment. In response to these crimes, Halliburton insisted that Jones’ situation only merited arbitration and not a criminal investigation. In September of 2009 the Fifth Circuit Court of appeals ruled 2 to 1 that Jones’ injuries did not relate to her employment and hence are not covered by her contract. Oddly enough, the court did assert: “We do not hold that, as a matter of law, sexual-assault allegations can never ‘relate to’ someone’s employment.” It would certainly be interesting to see what sort of employment this would apply to.

Franken’s amendment forbids “the Defense Department from contracting with companies that require employees to resolve sexual assault allegations and other claims through arbitration.” It passed 68-30. Interestingly, some Republican senators vigorously opposed this amendment. This lead Jon Stewart to make an ironic comparison between this attack and the responses of the same senators to news of ACORN’s “pimp” incident.

The comparison is rather apt and points out a rather typical inconsistency in how people apply their (alleged) principles. To delve into a little ethical reasoning, what seems to be going on is a case on inconsistent application. The basis idea is that people must, on the pain of being inconsistent, apply the same principle in the same way across cases. Naturally, if there are relevant differences between the cases, then the application need not be inconsistent. After all, a relevant difference between cases would justify a different application of the principle.

In the case of ACORN, the general attack was that Acorn was accountable for the misdeeds of its employees. A specific attack was that Acorn should be denied federal support because of these misdeeds. On the face of it, these attacks are reasonable. After all, organizations have a degree of moral and legal accountability regarding those they employ-especially when the employees are acting within company owned property. The federal government does, of course, have the power to decide which groups get money and it seems eminently reasonable to consider the behavior of such groups when making such a decision. Because of this, I agree that Acorn should be taken to task, should police itself better, and that their funding should be reviewed.

In the case of the bill, Franken is proposing the same sort of standard be applied to contractors. If the logic holds for Acorn (and it does), by analogy it should hold with the contractors. After all, just as we do not want federal money going to folks who are willing to advise fake pimps, we certainly do not want it going to those who seem intent on protecting real rapists (and themselves, of course).

Obviously, if someone can present facts that break the analogy between ACORN and Halliburton, then this argument would fail. Further, if anyone can successfully argue that companies should be protected from legal action by employees who are raped by other employees while on the job then the overall justification of the amendment would fail.