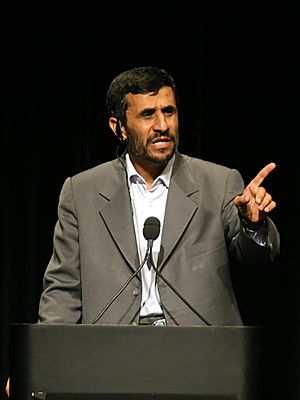 Iran recently held its presidential election and, not surprisingly, Ahmadinejad is the official winner. However, not everyone has accepted the legitimacy of the results. In fact, supporters of the other candidate, Moussavi, have been protesting the results and alleging fraud.

One point of concern is that Ahmadinejad received 62% of the vote. To some, this seems like too much of a victory given the apparent support enjoyed by his opponent. Of course, it should be noted that the impression of how people would vote might be biased. After all, the media focused its attention on Tehran and other urban areas rather than in the rural areas and smaller towns. Ahmadinejad is well known to enjoy overwhelming support in these areas. Given that 75% of the voters live in these regions, getting 62% of the vote does seem like a real possibility. However, it is hardly unreasonable to be suspicious of the result.

A second concern is that the election results were tallied with amazing speed. While this does not mean that the results were pre-set or rigged, the speed has raised some concerns. Naturally enough, this fact could be explained away. However, it does provide grounds for concern.

A third concern is the fact that people in Iran have presented some evidence that fraud took place. Whether these claims will pan out or not remains to be seen. The Supreme Leader has promised that all such accusations will be properly addressed.

While folks in the West (and Iran) might be disappointed by the (apparent) re-election of Ahmadinejad, it seemed almost inevitable. While Iran has voting and is technically a democracy, politics is rather controlled in the state. In some ways, it is comparable to the United States. After all, we have two parties who run the main show and anyone outside of their ranks has virtually no chance of getting elected to any substantial office.

What might be most important about the Iranian election is not who won (this was, as just noted, probably set in advance). Rather, it is the fact that there seems to be a lively and growing opposition movement in Iran. What was rather amazing was what was absent this time-the chanting of “Death to America” seems to have gone out of vogue. This, of course, might be a short lived phenomena, but perhaps we are seeing the foundation of meaningful change in Iran.

Iran has a rather large youth population and a large number of women who are of voting age. These youth seem to be interested in having Iran join the community of nations in a peaceful and productive manner. Many of these young voters also seem to be genuinely opposed to the way Ahmadinejad acted and presented Iran to the world. This is not to say that they love the West in general or America in particular. However, they do seem to desire to step away from confrontation and to be interested in improving relations with the United States.

Obama has been condemned by some for not speaking out against the alleged election fraud. However, Obama obviously sees that this is a delicate situation. If he comes out for the opposition, that would (ironically) harm them. After all, an endorsement from America is not going to win many hearts and minds in Iran.While a strong opposition would probably be good for America, if we support them we run the risk of “tainting” them in the eyes of the Iranians (and the rest of the Middle East). Ironically, by trying to help them, we could end up destroying them. So, paradoxically, the best aid we can render them is to not get directly involved. If they can grow in power and get influence in the state, then they can reach out to us-of their own free choice. That would make a significant difference.

Also, Obama has to deal with Ahmadinejad (assuming the election results stand) and antagonizing Iran is not going to help our relations. Further, if we started getting self-righteous with Iran, they would no doubt raise the spectre of our 2000 Presidential election. From a pragmatic standpoint, it might be best to just stay out of the dispute and simply state our support for legitimate elections and democracy. Naturally, we should support any international efforts to assist Iran in verifying their results.

Overall, the fact that Iran is experiencing internal dissent and opposition is good for the United States. If this opposition can help moderate Iran from the inside, then we will find it that much easier to establish diplomatic relations and work with the country.

It bears repeating that we could really screw things up. Iranians remember who it was that propped up the Shah’s police state and who used to meddle in Iranian politics. If we are seen as playing those old games, this will not go over well at all and will actually hurt the opposition. So, we have to be very careful.

Naturally, if the allegations of fraud turn out to be true, we should condemn such fraud. If violence is being used against the opposition, we should condemn that as well. But, we need to avoid being seen as the Great Satan again. Rather, we want to be seen as a possible friend. While this might seem naive, we do have considerable common ground with Iran. Iran is, as odd as this might seem, a democracy (a theocratic one, to be sure, but the democratic elements are real). Iran has a well educated population and a vested interest in order, stability and economic growth. Even now, Iranians come to the United States to be educated. Of course, we also have much that puts as at odds and these concerns should not be underplayed. Iran has strong theocratic elements, is tied to various terrorists groups, and has done much to work against us in Iraq.  Ahmadinejad has denied the Holocaust, made it clear that he wants to bomb, and has expressed a desire to wipe out Israel. But, Iran need not be our everlasting enemy and we have an excellent opportunity to make progress. Working out our difficulties peacefully seems preferable-especially if we envision radioactive wastelands where Israel and Iran used to be.