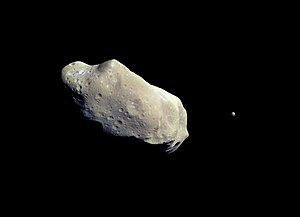 While the notion that something will smash into the earth from space is often seen as science fiction or something that lies far in the future, we know that the earth has been hit by large objects in the past. In fact, everytime we look at the moon we are reminded that things come flying in from space. After all, the moon is pocked with impact craters.

While most educated folk are intellectually aware of the risk posed by an impact and some groups have informed politicians of the threat, little (if anything) has been done. After all, the threat seems so science fiction in nature that it is easy to dismiss it as a plot device in bad movies rather than a serious risk. Also, the risk is typically presented in scientific terms. Ironically, when folks present the evidence in the form of astronomical data and mathematics, this tends to diminish the impact of their claims. After all, people seem to be such that they react to threats from other humans and clear physical threats, but the abstract stuff does not seem to trigger our fear. Hence, people generally do not feel very afraid of such an event, despite the fact that it is a real danger and could destroy our civilizations (and even the whole race).

Scientists and others have been working on various plans to deal with an object that is on a collision course with earth. In theory, some of these should be effective. Of course, they can only be effective if they actually exist.

In addition to the fact that people seem to not be seriously worried about this threat, there is the cost of developing a system that can deal with such an object. We are, obviously enough, in an economic crisis and involved in two wars. As such, dumping money into building something to deal with “space rocks” would no doubt strike most people as silly. There is also the concern that such technology might be seen as developing and deploying space weapons and this could have serious political implications.

As such, what will most likely happen is this: at some point in the future, we will find that something is heading our way. The politicians will pontificate, people will panic, and we’ll start a crash program to do something about it. Maybe it will work, or maybe we’ll be wiped out. If we do get wiped out, perhaps another species will take our place. In any case, the universe will get along just fine with or without us. After all, our survival surely only matters to us.