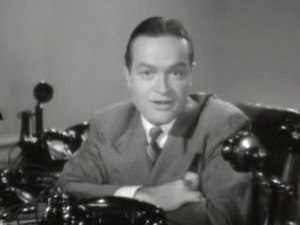 By appearing on stage with a golf club, Stephen Colbert consciously stepped into the shoes of Bob Hope. Bob Hope was, of course, perhaps best know for his involvement in the USO-first appearing as a young comedian during the Revolutionary War with his his famous King George III impressions.

It is good to see a celebrity of Colbert’s status in Iraq, bringing some live entertainment to the troops. Compared to WWII, such support from the famous folks seems to be a bit lacking. Of course, these days soldiers have ready access to television and the internet, so their isolation is not as great as in those days. However, there is still something special about having a person actually there, live on stage-as opposed to appearing on TV or YouTube.

While it might seem odd to have a comedian who pretends to be a right-wing pundit go to Iraq, Colbert seems quite popular with the troops. While Colbert has been critical, in his comedic manner, of the war and George Bush, he has been consistent in his respect for American soldiers and has encouraged his viewers to support the troops and their families.

This nicely illustrates that we have, in large part, learned a valuable lesson from the Vietnam war. This lesson is that a person can be critical of the war and the politics around that war without turning against the American soldiers fighting that war. The way American soldiers were treated during the Vietnam war by some Americans is a shameful part of our history. For the most part, American soldiers are respected for what they have done and people generally recognize that the few shameful acts are the actions of individuals and not reflective of all the men and women and uniform.

It might seem odd to some to have a comedian entertaining the troops. However, this is actually an excellent choice. People learned in previous wars that comedy is one of the best breaks from war. No wonder that Bob Hope was one of the most popular USO acts over the years. As such, having a comedian go to a war zone is not frivolous or insulting. Rather, it is giving the troops something vital to human life-some fun.

President Obama also participated in the first show-ordering a general to shave Colbert’s head. It was a nice bit, nicely delivered. While some might think that such a comedic bit damages the dignity of the office, it was a good idea and nicely shows the nature of the American presidency.

While having a sense of humor does not make one a leader, it is a virtue in a leader. The ability to be funny and appreciate humor shows wit. The ability to participate in such humor also shows that a person does not take himself too seriously. While a leader should be serious, being too serious and taking oneself too seriously are generally not good things. As an extreme example, take the “dear leader” of North Korea or various other dictators.

As far as the nature of the presidency goes, we do expect (or hope) that our president is person of distinction and dignity. However, we also expect the president to be one of us and not completely aloof and detached. As such, we tend to appreciate a president with a sense of humor. Also, America has never had a king. We have no history of being ruled by someone who is supposed to be divine or divinely appointed (although Katherine Harris indicated she believed God picked Bush to be president and some folks claim that that others see Obama as being like God) . Our leaders are just people, elected by other people and we seem comfortable with that. As such, some dignified comedy from the president is just fine-especially when he is doing so as part of a USO show.