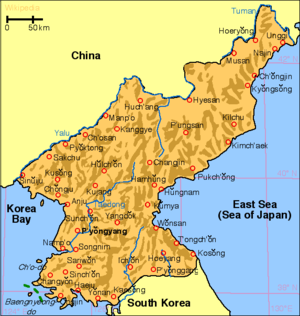 As I watched the news about North Korea making various threats, I wondered about the motivation of their leaders. While some regard their great leader as a goofball, it would be unwise to let that contempt lead us to mistakes in judgment. While they might be acting in a crazy way, their might be a method to their madness.

The stock answer is that North Korea wants attention and intends to use its bad behavior to gain concessions and aid. That is a reasonable possibility. After all, there is a established pattern of bribing countries to behave better.

One possibility that struck me was that North Korea actually wants us to invade. While this seems like madness, a little consideration shows that this could be a possibility.

One reason to think this is that the great leader might wish to go out in a blaze of glory. A battle with the world could do this. Of course, this assumes a level of madness that seems unlikely. So, let us reject this.

A second reason to think this is that North Korea might gain from a limited engagement with the United States and South Korea. They could very well make some incursions into South Korean territory, do some damage and then claim a victory of sorts. They might even decide to take and hold land. After all, they know that the United States is bogged down in two wars already and that we have very few troops in the area. They also probably believe that we will not use nuclear weapons. While this is less crazy than the first option, this also seems unlikely.

A third reason is the fact that being invaded by the US can be a financial gold mine. When we liberate or defeat a country, we do the opposite of the classic conquerors. Rather than subjugate the people and strip the country of wealth, we pour in billions to rebuild the nation, help its people, and strengthen its economy. Weirdly enough, being invaded and defeated by the United States would be a huge boost for North Korea. Well, for the folks we didn’t kill. While this seems crazy, it is something to think about.

Of course, the most plausible explanation of North Korea’s behavior is that they are engaged in political posturing to gain attention, to deal with domestic issues, and to try to get some concessions from other nations in return for backing away from their belligerent behavior.