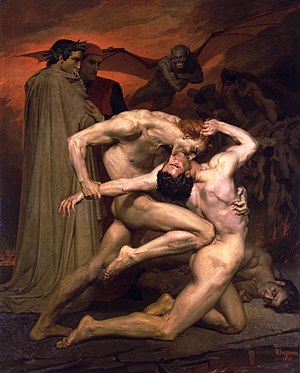 As mentioned in a previous post, philosophers seem to assume that an answer is needed to the question of why one should be good. This seems to be based on the assumption that people need to be motivated to be good and hence default to evil or at least to being non-good. As a change of pace, I thought I’d turn this question around and ask “why be evil?”

So, how about a case for being evil…

First, if you ask people what they want, the most common answers, at least in my experience, involve material things-money, jobs, power, cars and so on. Of course, this is based on my experience, which might be unusual. Hence, there is a need for a broader base of evidence. This brings me to a second category of evidence-the media.

A quick glance at the leading magazines of today clearly shows what people prefer. Business magazines, such as Business Week, extort the value of wealth and success in business. Celebrity magazines, such as People glory in the fame and wealth of the stars. Turning to television, channels such as VH1 and MTV show the houses, cars, fame and wealth of celebrities and, of course, these things are all held up as being of great value. Many of the music videos, a defining art form of the 21st century, present the glory of wealth, fame and power. Given that art tends to reflect the values of a culture, it seems evident that wealth, fame and power are valued and preferred in this culture. If additional evidence is needed, a survey of the rest of the media will reveal that the general glorification of wealth, success and material goods is common. Thus it may be safely concluded that the media provides ample evidence that material success is preferable.

Fourth, people are willing to risk punishment in order to acquire material goods. Prisons are full of people, ranging from former corporate officers to petty thieves, who committed crimes in the attempt to make material gains or in search of material pleasures. Given that people will risk terrible punishments in order to gain material goods, it seems reasonable to believe that these goods are preferable.

Overall, given the arguments presented above, it seems eminently reasonable to accept that material goods are what people prefer and hence are preferable. What remains is showing how being unjust enables one to better acquire such goods. If it can, then that provides a rational motivation to be evil.

Consider, if you will, two people who are each starting their own software companies. One, Bad Bill is unjust. The other, Sweet Polly is just. Now, imagine a situation in which both Bill and Polly stumble across a lost laptop at a technology expo. This laptop of course, contains key trade secrets of another competing company. Polly will, of course, return the laptop to the rightful owners and will not look at any of the details- the information does not belong to her. Bill will, of course, examine the secrets and thus gain an edge on the competition. This will increase his immediate chance of success over the competition.

Now imagine what will happen if Sweet Polly continues along the path of justice.  She will never take unfair advantage of her competition, she will never exploit unjust loopholes in the tax laws, and she will never put people out of work just to gain a boost to the value of her company’s stock. She will always offer the best products she can provide at a fair price.
In direct contrast, if Bad Bill follows his path of injustice, he will use every advantage he can gain to defeat his competition and maximize his profits. He will gladly exploit any tax loophole in order to minimize his expenses. He will put people out of work in order to boost the value of the company stock. His main concern will be getting as much as possible for his products and he will make them only good enough that they can be sold.

Given these approaches and the history of business in America, it is most likely that Sweet Polly’s company will fail. The best she can hope for is being a very, very small fish in a vast corporate ocean. In stark contrast, Bad Bill’s company will swell with profits and grow to be a dominant corporation.

In the real world, Bad Bill’s unjust approach could lead him to a bad end.  However, even in reality the chance is rather slight-provided that Bill is smart and knows how to buy all the right people.

Naturally, more than a story is needed to make the general point that injustice is superior to justice. Fortunately a more formal argument can be provided.

The advantages of injustice are numerous but can be bundled into one general package: flexibility. Being unjust, the unjust person is not limited by the constraints of morality. If she needs to lie to gain an advantage, she can lie freely. If a bribe would serve her purpose, she can bribe. If a bribe would not suffice and someone needs to have a tragic “accident”, then she can see to it that the “accident” occurs. To use an analogy, the unjust person is like a craftsperson that has just the right tool for every occasion. Just as the well equipped craftsperson has a considerable advantage over a less well equipped crafts person, the unjust person has a considerable advantage over those who accept moral limits on their behavior.

It might be objected that the unjust person does face one major limit-she cannot act justly. While she cannot be truly just, she can, when the need arises, act justly-or at least appear to be acting justly. For example, if building an orphanage in Malaysia would serve her purpose better than exploiting those orphans in her sweat shop, then she would be free to build the orphanage. This broader range of options gives her clear edge-she can do everything the just person can do and much more. With her advantage she can easily get the material goods she craves-after all, she can do whatever it takes to get what she wants.

Turning to the real world, an examination of successful business people and other professionals (such as politicians) shows that being unjust is all but essential to being a success. For example, it is no coincidence that Microsoft is not only a top software company but also often regarded as being one of the most unjust. Now I turn to the just person.

If a person, such as Polly, is just then she must accept the limits of justice. To be specific, insofar as she is acting justly she must not engage in unjust acts. Taking an intuitive view of injustice, unjust acts would involve making use of unfair tactics such as lying, deception, bribes, threats and other such methods. Naturally, being just involves more than just not being unjust. After all, being just is like being healthy. Just as health is more than the absence of illness, being just is more than simply not being unjust. The just person would engage in positive behavior in accord with her justice-telling the truth, doing just deeds and so forth. So, the just person faces two major impediments. First, she cannot avail herself of the tools of injustice. This cuts down on her options and thus would limit her chances of material success. Second, she will be expending effort and resources in being just. These efforts and resources could be used instead to acquire material goods. To use an analogy, if success is like a race, then the just person is like someone who will stop or slow down during the race and help others. Obviously a runner who did this would be at a competitive disadvantage and so it follows that the just person would be at a disadvantage in the race of life.

In light of the above arguments it is evident that the life of evil is the preferable life. That is probably why evil is a growth industry and is always hiring.