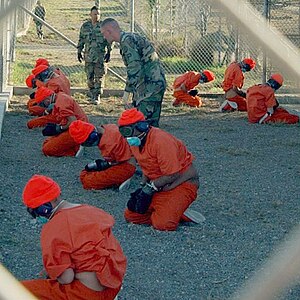 Our Guantanamo prison has become quite a political mess. Yielding to popular opinion, Obama promised to close it. However, his fellow Democrats recently decided to deny funding for its closure until he comes up with a plan. Perhaps the Democrats are being reasonable: after all, it would be unwise to allocate money irresponsibly (perhaps they learned something from AIG…). On the other hand, it is something of a slap at Obama. Perhaps they are trying to milk the situation for some political gain?

One of the main questions is what to do with the prisoners. One proposal is to transfer them to prisons on American soil. However, that has started off a frenzy of Not In My Backyard.

When people talk about transferring the prisoners, they often make it sound like they will simply be dropped off in a US city, perhaps with a new suit and $5 in their pocket. However, that is not the plan. The plan is to transfer them to a prison or prisons.

After a politician goes into a “no” frenzy, they typically start tossing out reasons as to why these prisoners cannot be imprisoned in his/her state. The main reason given is that these prisons would be  a terrible threat. To be specfiic, it is claimed that they might:  escape and commit acts of terror, radicalize other prisoners, establish means of funding terror (perhaps by tapping into the lucrative criminal enterprises thriving in American prisons) and so on.

On one hand, these are reasonable concerns. Presumably each members of Congress who has said “no” is doing so based on his knowldedg of  his state’s’ prison system. If they believe that their prison system cannot handle prisoners adequately, then such claims should be taken seriously.Of course, this should spur an investigation into these prisons.

On the other hand, it might be suspected that a political game is being played. After all, our prisons already hold very dangerous and wicked people. That is what they are, in part, intended to do.

Of course, some folks in Congress would have us believe that the Guantanamo prisoners are a special sort of prisoner and are beyond the power of our prison system to contain. The obvious reply to this is that we have already been containing them. Further, as others have pointed out, we already have terrorists and very dangerous people in our prisons. Naturally, if some of the prisoners have special training or are masters of escape (apparently not from Guantanamo, though) then they can be sent to prisons designed to deal with that. After all, we do have maximum security prisons in the US.

They also stress how these people would do very bad things if they got out. While this is a reasonable concern, it is not a special concern. Some of the folks who are in prison are there because they did very bad things and it is assumed that they would do such things again if they escaped. If we accepted that people who would do bad things if they escaped should not be locked up in the US, then we would need to transfers prisoners from the US to places like Guantanamo.  Also, during WWII we had POWs on US soil. If we can handle trained soldiers in a time of war, surely we can handle these prisoners as well.

Another tactic is to argue that having the prisoners brought to the US would cost the taxpayers money. One flaw with this argument is that they already cost us money. Of course, it is reasonable to consider the expense. But, if we can afford to keep 1% of our population locked up, we can handle a few more prisoners.

Yet another concern is that the prisoners might get trials and be released.  Naturally, the fear is that they will be released in the United States and start being terrorists here. Or they might go someplace else and be terrorists there. It has been claimed that 1 in 7 of the 534 detainees already transferred abroad have returned to an involvement in terrorism or militant activity. Interestingly, this gives them a recidivism rate far less than criminals. Apparently about 50% of criminals return to crime after being in prison. In California, the percentage is even higher.

While this terror recidivism is a concern, the same concern applies to anyone who is sent to prison. If is acceptable to keep the Guantanamo prisoners locked up indefinitely, then the same logic would apply to all prisoners. In fact, normal criminals would be of greater concern because of a higher rate of recidivism. However, this approach hardly seems correct or reasonable.

Perhaps these folks in Congress are worried about the possibility of the trial as much as the possibility of release. After all, a trial might reveal embarrassing or unpleasant facts about what was done. However, if these prisoners are as bad as is claimed and if we have imprisoned them justly, then surely there must be adequate evidence that would stand up in a legitimate trial? Surely we have nothing to fear from being the unjust and wicked to justice?

One reasonable legal concern is the status of the prisoners. Are they criminals? If so, they have the right to a criminal trial. Are they enemy combatants? If so, they would fall under the relevant laws and would also be entitled to proper treatment? Or do they occupy a legally gray area? A case can certainly be made for that. However, we cannot just leave them in the gray-something must be done.

While some folks on the right have been calling the closing of the prison and the decision to have trials a public relations or popularity thing, it is actually a serious matter. While Bush and his fellows seemed to take the view that what others think of the US matters not, Obama realizes that it does matter. While nations are not individuals, they are composed of individuals. If one person thinks well of another, then she is more inclined to help that person. If one person thinks poorly of another, then they are less inclined to help. If people in other countries think better of us, they will be more inclined to work with us.