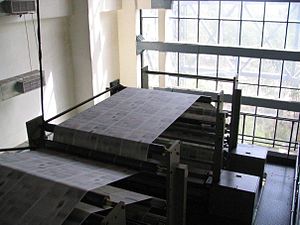 When I was a kid, my family got the Bangor Daily News every morning. I’d start with the comics and read most of the paper-especially the stories relating to politics and science. When I go back home to Maine to visit, I still read the Bangor Daily and the Portland Press Herald. Although I now live in Tallahassee, I’ve only read the Tallahasse Democrat a few times and do not subscribe. Given that many newspapers are in dire straits and experts are talking about the death of print, I am clearly not alone.

So, why are some newspapers doing so poorly?

In some cases, the answers have nothing to do with newspapers but with poor business choices and management. For example, a newspaper might have failed to keep up with the times or not done a very good job selling advertising. While these are obviously problems, they are not specific to newspapers.

One of the sweeping reasons put forth is the internet. This relatively new media impacts the newspaper in many ways and is perhaps the most serious threat to newspapers (although TV has long been nibbling away at them-especially 24 hour cable TV).

First, running a print newspaper is fairly expensive: the paper has to be printed, reporters need to be paid, the papers have to be distributed and so on. In contrast, delivering information via the web can be much cheaper and people are willing to provide content for free (although much is of dubious quality).

Third, the existence of internet based advertising and classified ads (such as craigslist) has cut into newspaper revenue, making it harder for them to survive.

Fourth, there is the fact that the web provides a much richer and more interactive experience. You can see videos, conduct searches, follow links and so on. A static newspaper cannot compete very well with that.

Fifth, people’s habits have changed. When I was a kid, many people would linger over the newspaper while eating breakfast or read it while commuting. Today, people live a more rapid lifestyle and the newspaper is perhaps just a bit too slow for that. Also, many folks carry around smart phones or laptops, so they have no need to also carry a newspaper.

A fairly small reason is that as people become more inclined to look green, they might be less inclined to buy newspapers. They are, after all, made from dead trees.

These factors and others have caused some people to predict the end of newspapers and this does have some plausibility. After all, if people can get all their news and such instantly via their smart phones and computers, there would seem to be little reason to buy a newspaper.

A second reason is that a newspaper is cheap and disposable-you can just pick one up, read it and then toss it (hopefully into a recycling bin). So, you can take a newspaper places were you would not want to break out a laptop of smartphone. Of course, we will probably see super cheap descendants of the Kindle that will eliminate this advantage.

A third reason is that newspapers are actually pretty good technology: they do not need batteries, they have high resolution, they do not crash, and they are easy to hold and read. As a comparison, try reading a newspaper on the toilet and then try the same with a laptop. Of course, devices like Amazon‘s Kindle are trying to break that advantage. Also, newspapers have uses after you are finished reading them: wrapping things, stuffing into wet shoes, and serving as packing filler. Of course, that last bit is really reaching.

So, will newspapers die eventually? My guess is yes-once there is a reader machine that is cheap, tough and easy to read on the toilet. That will mark the end of the printed newspaper-unless, of course, some other factor keeps it going.

However, the newspaper will not really die-rather, it will change mediums. Instead of having a paper newspaper, we’ll have the same sort of content only in digital format. There will still be a need for professional writing, professional journalism, and so on in the future.

There will almost certainly be a very rough transition as old newspapers fail to shift mediums and fall behind the times. Also, people will probably be quite enamored of the free content of blogs and amateur reporting for a while. However, people will probably realize that the old saying is true: you get what you pay for.

So, the newsfolks who are able to create and adapt to the new model of newspapers will do quite well eventually. The Kindle might be an excellent model of how this will work: people will buy content to download wirelessly.  Or it might flop. That is the thing about the future-you never know what it will bring until it drops it on your head.