As I’ve mentioned in other blogs, I often end up with various obsolete computers, including various laptops. Since I am, as a Maine Yankee, compelled to find uses for things, I have put some effort into finding things to do with these old laptops.

When putting something to use, it is a good idea to see what qualities is has and then base its use on such qualities.

In general, laptops have the following qualities relative to desktop computers: they are smaller, more energy efficient, more portable and less noisy.

The smaller size  and portability of laptops makes them ideal for their primary use, that of being a portable computer. Naturally enough, an old laptop can be used like a new laptop-as a portable computer. Of course, it has the added advantage that being old it is worth less and hence if it is stolen or broken on the journeys it will not be as much of  a loss.

The energy efficiency and quietness of laptops also makes them ideal for re-purposing as media computers. Being energy efficient, they are cheap to power. Being quiet, they will not interfere with audio media.

I have read various articles on hardware that allows users to stream music and video to their living room. However, such hardware tends to be both expensive and difficult to set up. An older laptop can make an excellent alternative.

Suppose that you would like to have the music on your PC or Mac available in your living room. One option is to buy an expensive media extender and spend a long time trying to make it work. Another option is to use an old laptop. Simply put your music files on the laptop and plug the soundout into your sound system. In my case, I have a basic Dolby 5.1 system that is plugged into my TV. Conveniently, it has auxiliary inputs so I can plug an old laptop (or an MP3 player) into it. If your laptop has a weak sound system, you can get a USB sound device, such as some sort of Soundblaster. I bought a basic one a few years ago for under $50 that works quite nicely.

Suppose that you’d like to have the videos on your Mac or PC available in your living room. You can buy an expensive media device and get it to work. Or, as with music, you can use an older laptop to do this. While video is more demmanding than audio, even fairly old laptops (Pentium II and newer) can handle video reasonably well. The main challenge is getting the video onto a TV from the laptop. Some laptops have a built in S video port and can be plugged directly into a TV that has such a port. Newer TVs also tend to have VGA connectors and almost all laptops have those. You’ll just need a cable to make the connection. Naturally, you’ll also need an audio connection as well (unless you want to use the usually weak laptop speakers).

Finally, suppose you want to have your photos available to show on your TV. Setting this up is just like setting up an old laptop as a video system. Since displaying photos requires very little computing power, even a rather old laptop can be used for this purpose.

When using an old laptop in one (or more) of these ways, it is important to keep in mind that laptops tend to be inferior to desktops when it comes to operating for extensive periods of time. Laptops tend to be quiet because they either have very small fans or no fans at all. This can make heat a serious problem for a laptop. Such heat can cause the laptop to suffer from errors, shutdown or even fail. Laptops also tend to have components that are less heavy duty than desktop components. While this makes them portable, it also makes them more prone to problems if they are kept on for long periods of time.

To minimize heat problems, be sure that the laptop is located where it can get adequate air flow. There are various gadgets sold to elevate laptops and some of these have built in fans. Of course, if you use a cooling pad for a laptop, you will want to make sure that it is quiet. Using a noisy fan system to cool  a quiet laptop would not make much sense.

To lessen the chance that the laptop will fail, be sure to disconnect the laptop’s power supply from power-even when it is off. Even when a laptop is off, if the power supply is plugged in, it will still draw power and thus put wear on the components. I’ve known people who have gone through a few power supplies by burning them out in this way. You can also do this by plugging the laptop into a surge protector with an off switch. It is also a good idea to have the laptop surge protected anyway. 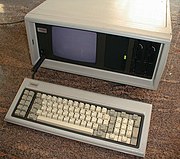 Now, if your laptop looks like this, then there is probably not much you can do with it these days. Then again, it would make an effective door stop.