I have a modest amount of nerdtastic talent that allows me to often fix various computer and software problems. In addition to dooming me to helping people with various difficulties, it also enables me to revive old computers and put them into working order. Currently, I have quite a collection of obsolete, but functional computers. Among these are a number of laptops, including some from as far back as the early 1990s. In some cases, I have been able to give older computers to people who can use them. Often, however, people have no desire to have such old technology and instead prefer to have something brand new.

When I first started using computers, laptops simply did not exist. There where portable computers, but they were portable in the same sense that a large suitcase is portable. When laptops were finally available, I saw the advantages of having one. Sadly, as a graduate student I could not afford one. But now, as a professor, I can afford to buy not only a laptop, but a very good one. However, I still keep using older models-my newest laptop is an iBook G4 which is, in computer years, dead. I even have a Powerbook 5300 that still works just fine, but I mainly just keep that around because it has a floppy disk drive.

While I enjoy computer games and do work with graphic software, what I do most on computers is write. While some of the fancier features of word processing software do require some computer power, I have really noticed little difference between typing on the SE/30 I used in grad school and typing on the Pentium 4 PC in my office at school. Hence, power is not much of a factor in regards to using a laptop for writing. Thus, an older laptop can be used for such a task.

While some web sites, such as YouTube, do require a degree of computing power, most web sites can be viewed just fine on an older laptop, even a mere Pentium computer. Email programs also tend to have fairly moderate requirements as well, hence an older laptop can be used for this purpose as well.

Of course, the mere fact that something is still usable hardly shows that there is a good reason to use it. But, there are good reasons to use old laptops (and old computers in general).

One minor reason is that old laptops can be used to run older software, especially older games. Many rather enjoyable old PC and Mac games will not run at all on new computers or require rather extensive tweaking. However, they will obviously run just fine on the computers from the same time period.

A more serious reason is that keeping a laptop is use keeps it out of the landfill. While some computers are recycled, many of them just end up as garbage. Further, laptops (and computers in general) contain such things as mercury and other hazardous materials. So, it is generally better for the environment to not have these materials leaking out of a landfill or released by the crude recycling methods typically employed.

The most practical reason to use an old laptop is the economic reason. If you keep using your old laptop, you don’t have to buy a new one. If you don’t have a laptop, older models are much cheaper than newer ones. For example, I was able to get an IBM Thinkpad 600E for $40. I had to do some minor repairs on it and, of course, it is only a Pentium II machine. But it runs Windows 2000, Micrograde and Open Office just fine. 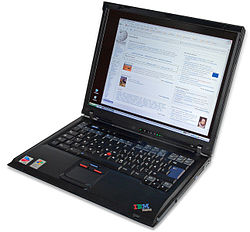 As everyone knows, the main reason to have a laptop is portability. However, this advantage also puts laptops in danger-they can easily be stolen and can also be dropped. If you have an obsolete laptop, it is less likely to be stolen (assuming that the thieves recognize it as being obsolete). Also, if it is stolen or damaged, you are out far less money. Even if you have a nice, new laptop, it can be very useful to have an old laptop for those circumstances in which you’d rather not put your shiny beast at risk. For example, I use my $40 IBM on campus and when writing outside. If something happens to it, I won’t be happy. But I’ll only be out $40.